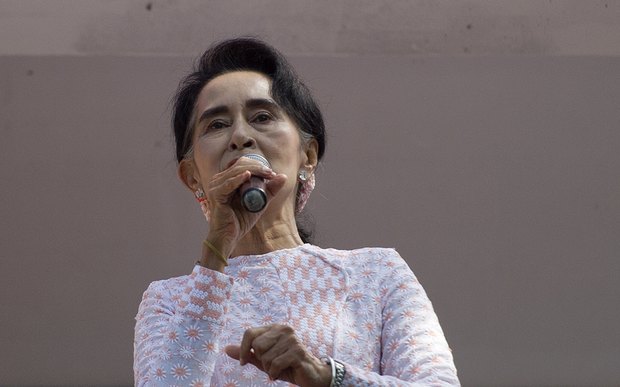 With more than 80 percent of seats declared, Aung San Suu Kyi's party has more than the two-thirds it needs to control parliament and choose the president.

But a quarter of seats are allocated to the military, which means it will remain hugely influential.

It specifically bars anyone whose children were born foreign nationals from holding the job. Both her sons were born British.

But Ms Suu Kyi, a Nobel Peace Prize laureate who spent decades under military-imposed house arrest, has insisted she would lead the country anyway if her party won.

Sunday's election was the first openly contested poll in Myanmar - also known as Burma - in 25 years.

The election commission has slowly been releasing figures, and by early on Friday morning the NLD needed only two more votes to reach the threshold required to give it a majority in both houses of parliament.

Then in a midday announcement, vote officials said the NLD had taken 348 of the 664 seats in the two houses of parliament.

Final results are not expected to come in for several days, while the process of choosing a new president will not begin until January, when parliament reconvenes.

Current President Thein Sein and the head of the military have already said they would respect the outcome of the election and work with the new government.

About 30 million people were eligible to vote in the election, and turnout was estimated at about 80 percent.

It was widely seen as a fair vote though there were reports of irregularities, and hundreds of thousands of people - including the Muslim Rohingya minority, who are not recognised as citizens - were denied voting rights.