A third dam is causing concern in Brazil after two other dams holding wastewater from an iron ore mine collapsed, swamping towns and killing at least eight people. 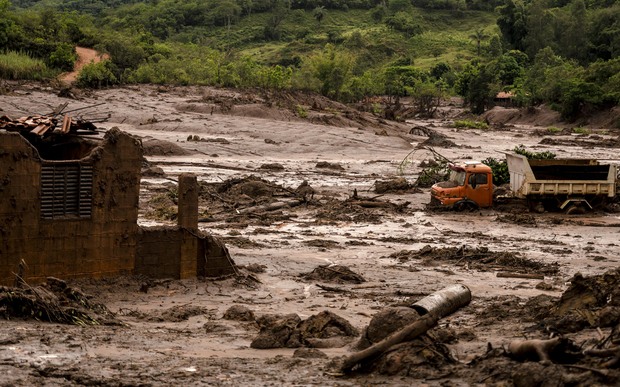 Two dams of an iron mine belonging to Samarco have broken in the city of Mariana, Brazil. Photo: AFP

At least eight people were killed and another 21 are missing after a huge wall of red sludge descended on the south-eastern village of Bento Rodrigues, when the two dams collapsed.

The authorities in Brazil are now concerned about the safety of a third dam and have ordered the evacuation of all people who remained in the town.

Brazil's government said on Wednesday it might fine mining giants BHP Billiton Ltd and Vale SA for the "environmental catastrophe" caused by the ruptured dams.

The government was increasingly concerned over the rising death toll and contaminated mud flowing through two states as a result of the disaster. It was studying the mine's permits and would ensure the owners paid for clean-up costs, Environment Minister Izabella Teixeira said in Brasília. 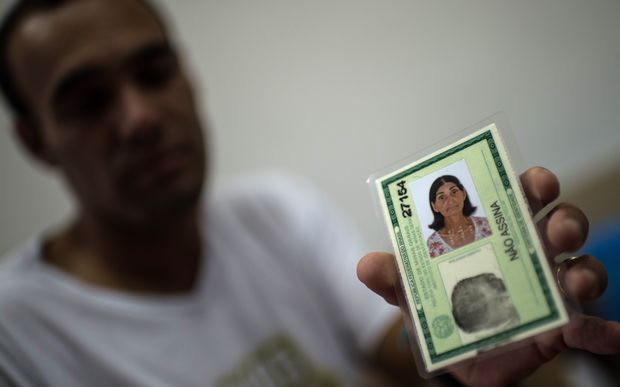 Marcello Jose Felicio shows the ID of his mother Maria, who disapeared during the mudslide Photo: AFP

"If federal fines are applicable, we will apply them," Ms Teixeira told reporters. "There will be punishment, and under Brazilian law the environment has to be repaired."

Her remarks were the strongest yet from the government, which was caught off-guard by the disaster in the mineral-rich state of Minas Gerais nearly a week ago.

The warning came as the chief executives of Australia-based BHP, the world's largest mining company, and Brazil's Vale, the world's biggest iron ore miner, took responsibility for the disaster.

After surveying the devastated area together, BHP CEO Andrew Mackenzie and Vale CEO Murilo Ferreira told a news conference their companies would meet all their obligations as joint owners of the mine, which is formally run by Samarco Mineração.

BHP and Vale would create a joint fund for the recovery costs, but added that it was too soon to calculate how much would be needed. They also reaffirmed their long-term commitment to the joint venture.

"We are 100 percent committed to do everything we can do to support Samarco and make this right," Mr Mackenzie said. "We are deeply sorry for everyone who has or will suffer for this terrible tragedy." 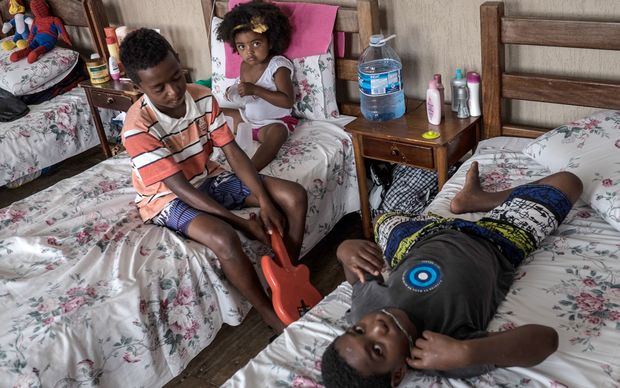 Some survivors of the mudslide that buried their Brazilian village, Bento Rodrigues Photo: AFP

The apologies, however, were not doing much to calm nerves. More than 500 people remained displaced because of destroyed homes, and recovery crews were slogging through nearly 100 km of mud-caked floodplain in a search for more victims.

Minas Gerais governor Fernando Pimental said the companies weren't doing enough to address the problems caused by the disaster, including the interruption of water service for hundreds of thousands of residents downstream.

Water from the dams that burst contained mining residue known as tailings.

"Samarco, to blame for all of this, will have to make a greater effort," Mr Pimentel told reporters in Governador Valadares, a city of 300,000 residents that was now having its water trucked in.

President Dilma Rousseff, who will fly over the disaster area on Thursday with Teixeira, believed the mining companies must pay for the cleanup of devastated and flooded villages and the restoration of water supplies, a presidential aide said.

The Brazilian leader has asked her chief of staff Jaques Wagner to meet with the companies' executives.

Mr Mackenzie flew to Brazil this week as Mr Ferreira came under increasing fire from local authorities, residents and media for what many saw as a laconic response to one of the South American nation's worst mining disasters.

Neither the companies nor Brazilian officials have determined a cause for the ruptures, though Samarco acknowledged that workers, 13 of whom were washed away by the torrent, were engaged in an expansion of the first dam when it burst. The work was necessary because of increased output at the mine.

A state prosecutor said investigators were probing reports that Vale contributed to higher water volumes behind the dam by sending waste from one of its nearby mines to Samarco's tailings pond. When a reporter asked about the reports at the news conference, the executives did not answer.

The disaster has become a public relations, regulatory and financial nightmare for the companies. Politicians, environmentalists and residents are calling for tougher rules on the mining industry, which employs hundreds of thousands of people and is a major source of export revenue. 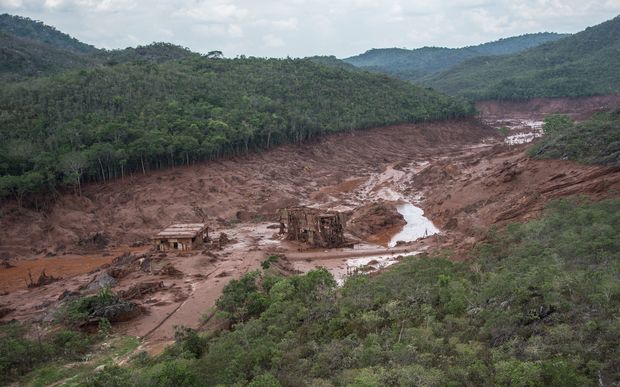 Water from the dams, at the Germano mine, flooded a large area in the village of Bento with toxic waste. Photo: AFP

In addition to the financial costs due to lost output and repairs at the mine, which accounts for about 10 percent of Brazil's iron ore exports, BHP and Vale are expected to face steep fines as well as lawsuits at a time when iron ore prices are at their lowest point in a decade.

A person familiar with the insurance framework around the mine said the disaster could trigger $US600 million in insurance claims.

In the days after the dam burst last Thursday, Vale, a company with decades of mining experience in the area, made only a brief statement and referred all inquiries to Samarco. Though Mr Ferreira made a visit to the mine over the weekend, he did so quietly and without disclosing the trip until BHP announced Mr Mackenzie was en route.

In response to the growing public criticism, Vale said it had "supported Samarco since the first day" of the disaster and had provided 100 employees, helicopters, fuel and vehicles to the recovery effort. On Wednesday, Mr Ferreira said he did not see the need to publicise his first visit to the area because he did not want to speak on behalf of Samarco.

The mine employs about 1800 workers, most of whom are now on paid leave as operations have been halted.