Republican Donald Trump's plan to deport 11 million undocumented immigrants from the US has been savaged by his party rivals in a TV debate. 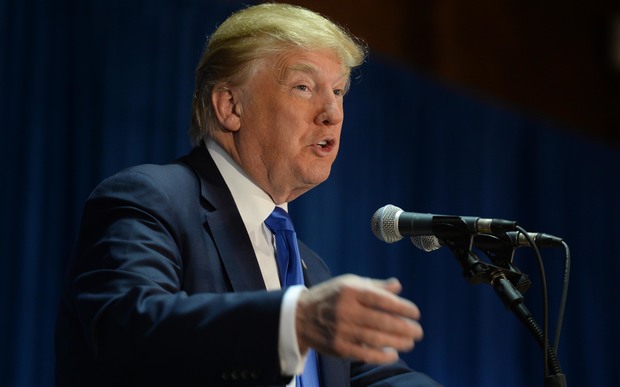 His hardline proposal was attacked as impractical and divisive by John Kasich and Jeb Bush, who are also running for the Republican presidential nomination.

Mr Trump, a billionaire New Yorker who has been leading in the polls, was booed as he tried to counter-attack.

Another source of friction at the debate in Milwaukee was foreign policy.

The eight candidates were divided on whether the US should do more to intervene in the Middle East, especially in the fight against Islamic State militants.

But immigration sparked the biggest confrontation, when Mr Trump said a wall should be built at the US-Mexico border and all migrants living illegally in the US must be deported.

This was met with disdain by Mr Kasich, the governor of Ohio.

"Come on, folks, we all know you can't pick them up and ship them back across the border. It's a silly argument. It's not an adult argument."

Mr Bush, the former Florida governor, said it would tear families apart and played into the hands of Democratic frontrunner Hillary Clinton. 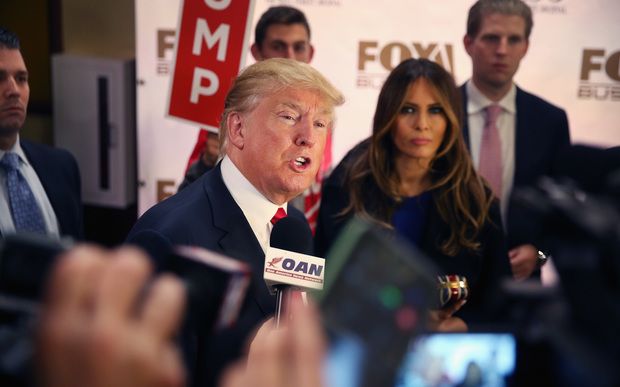 Donald Trump and his wife Melania speak to media after a Republican presidential debate. Photo: AFP

Mr Bush, who was more forceful than in previous debates, said that Ms Clinton's campaign would be doing high-fives because Mr Trump's hardline stance on immigration threatened to alienate Latino voters, a fast-growing demographic.

Mr Trump was also booed when he asked of the only woman on stage, the former executive Carly Fiorina, "why does she keep on interrupting everyone?"

Marco Rubio, who's surged in the polls at Mr Bush's expense, had another good night. Rand Paul probably had the best two hours of his campaign.

Ben Carson, who has faced questions about exaggerating parts of his inspiring life story, escaped unscathed.

Crucially, not one of his opponents mounted an attack. 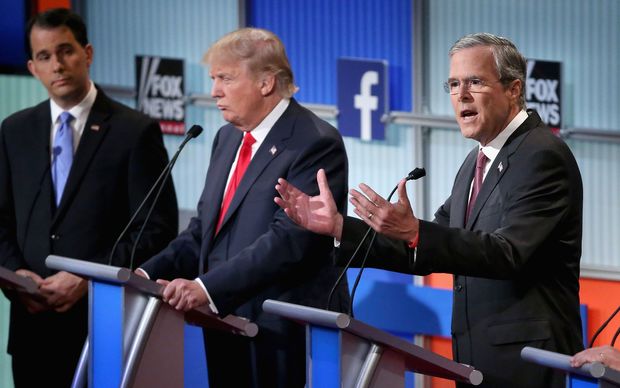 At one point, Mr Rubio and Kentucky Senator Rand Paul tangled over the subject of military spending, with Mr Paul saying his rival's plan to increase military spending went against conservative principles.

"We can't even have an economy if we're not safe," responded Mr Rubio.

If Mr Trump was elected as the Republican candidate, a McClatchy-Marist poll showed he would still be well behind Democratic presidential candidate Sen. Bernie Sanders, who is trailing Ms Clinton, according to thehill.com

Mr Sanders would lead Mr Trump by 12 percent and Mr Bush by 10 percent.

The primary elections, in which the Republican party and the Democratic party pick their presidential nominees, begin in February in the state of Iowa.

And the nation will go to the polls in November to finally pick its new president.