Climate change could increase poverty levels by up to 100 million people, the World Bank says - and a second study says several cities could be swamped. 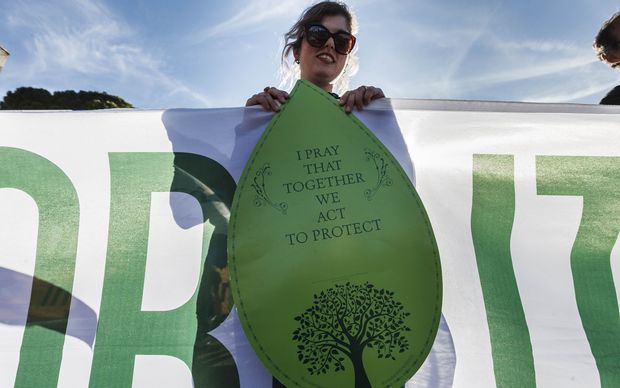 Hundreds of people take part in a 'March for the Earth' to show support for Pope Francis' call for climate action in Rome on 8 November. Photo: AFP

In a new report, the World Bank warned 100 million more people could be pushed into poverty by 2030 unless action was taken to prevent global warming.

It said increasing temperatures would ravage crops and fuel the spread of malaria and other diseases.

Up to 5 percent, or more than 150 million, more people could be affected by diarrhoea with warming of 2-3°C, with an estimated 48,000 additional deaths among children under the age of 15 from diarrhoea by 2030.

"Good" development with climate change in mind - such as expanding programmes that reduced poverty while increasing people's capacity to cope with shocks - would help, it said.

Those efforts would need to be coupled with "targeted climate adaptation measures", such as infrastructure like dikes and drainage systems, mangrove restoration to deal with flooding, and the introduction of climate-resistant crops and livestock breeds.

A second study, published by US-based research group Climate Central, has found large swathes of Shanghai, Mumbai, New York and other cities would slip under the waves even if an upcoming climate summit limited global warming to 2°C.

A 2°C spike would submerge land currently occupied by 280 million people, while an increase of 4°C - humanity's current trajectory - would cover areas lived on by more than 600 million, the study said.

Climate Central vice-president Ben Strauss, who was the study's lead author, said the 2°C temperature rise would "pose a long-term, existential danger to many great coastal cities and regions".

Sea level rises corresponding to these 2°C or 4°C scenarios could unfold in 200 years but would more likely happen over many centuries, perhaps as long as 2000 years, according to the research.

Capping the rise in global temperatures to 2°C above pre-industrial levels is the core goal of the 195-nation UN climate summit in Paris from 30 November to 11 December.