The rock music belts into the humid Yangon night and there's a cheer from the party faithful, most with red stickers of the opposition flag plastered on their cheeks. 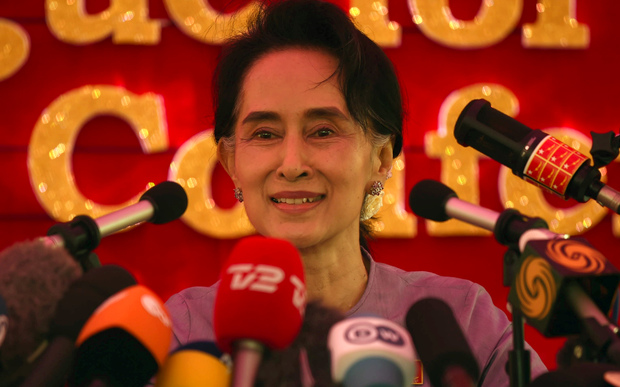 Myanmar opposition leader Aung San Suu Kyi and head of the National League for Democracy (NLD) speaks at a press conference from her residential compound in Yangon Photo: AFP

"NLD must win … there's only one leader of the people" they sing, before launching into a version of Eye of the Tiger with the lyrics changed to make Aung San Suu Kyi the hero of the anthem.

It's one of the last noisy campaign parties before the National League for Democracy (NLD) enters a rally-free period before Myanmar's vote.

Many of the faces in the crowd are young.

"I believe that if Mother Suu becomes leader of the country everything will change… she can bring international support," said one young woman, wearing a red NLD bandana.

Sunday's national election is a crucial moment in Myanmar's transition from a pariah state to an emerging democracy.

All going well, it will be the first relatively free nation-wide vote for 25 years and the long-suffering opposition party is brimming with confidence.

"We have done so many campaigns and door-to-door campaigns too, it's very successful as everyone is participating," Ms Thinn told the ABC. 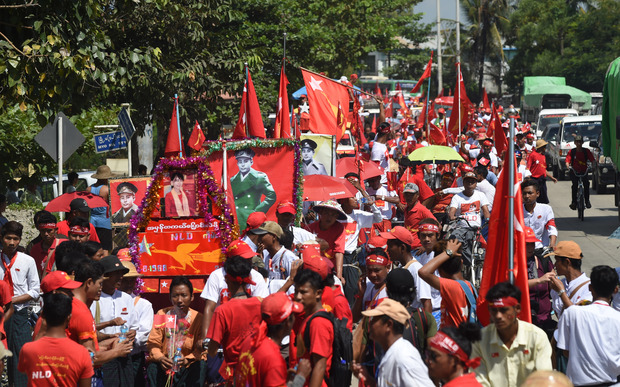 The incumbent Union Solidarity and Democracy Party (USDP) is putting on a brave face.

"We don't scare - our party is for the people," Aung Thein Lin said at his dusty party office in Yangon.

While the NLD promises widespread change, Aung Thein Lin hoped the reforms of the last five years would be acknowledged by the public.

But it may only be the sheer number of political parties splitting the vote that saves the USDP from a humiliating rout at the polls.

"No they [NLD] cannot get a landslide, I don't think so, because we have a lot of parties [competing], nearly 90 parties," he said.

The USDP does have some support among those who see the material benefits of their rule.

"USDP built the roads and bridges, whatever we need [so] I prefer USDP," said Myint Kyaing, a farmer in Bayat village about 20 kilometres from the capital.

But he struggles to earn enough income from his small plot of land and was in debt to money lenders, just one example of the economic hardships that continue despite the political renaissance.

The military and the military-backed ruling party have promised to accept the decision of voters.

"I think they will," said Richard Horsey, an independent political analyst based in Yangon.

"They've had a long time to think about the various scenarios, they've got the Constitution in place they want which protects their essential interests and so we're in a very different scenario now to 1990."

Under Myanmar's Constitution a quarter of parliamentary seats are reserved for the military.

"That isn't a number that's been picked at random - it's the number required to give them a veto over Constitutional change," Mr Horsey said.

The current Constitution gave the military control of key ministries such as defence and home affairs, which included police.

"And of course that Constitution also prohibits Aung San Suu Kyi from holding the presidency, which is another one of the military's red lines," Mr Horsey said.

There was intense speculation about what role the Nobel laureate will play in the post election landscape.

At a press conference on Thursday, Suu Kyi repeated her stance that she would "be above the president" leading the country.

"Constitutionally that's a problem [but] in practice it would be hard to disagree with the fact that she will be the most influential person," he said.

After the people of Myanmar cast their ballots on Sunday, the choice of a president will be up to the politicians.

In January, there will be a single vote for one of three candidates, with the runners-up becoming vice presidents.

Suu Kyi has been coy about who the NLD would put forward if they were to gain enough votes to choose the president.

"What she has said is that she will choose someone from within the party, a civilian," Mr Horsey said.

Who that might be is still the topic of intense speculation. 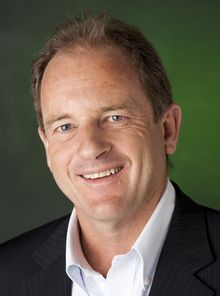 New Zealand and Australian politicians will be among the international election observers watching Sunday's voting, joining tens of thousands of domestic observers in what will be the most transparent vote Myanmar has seen in decades.

Labour MP David Shearer and National Rodney MP Mark Mitchell are among the poll observers and former National MP Wyatt Creech will also be on the trip, funded by the government as part of its aid programme.

Democracy in Myanmar was not perfect, but was a huge improvement from where it had been, Mr Shearer said.

"I would imagine there's a lot of excitement... I'm certainly excited to see what is going to be an historic occasion.

"Apart from the outcome of a democratic parliament, it's part of an ongoing process ... to free up society."

Mr Shearer would be going to several polling booths to observe and make sure the election is free and fair, he said.

"So I'll be out of the main urban areas and checking closely for anything out of the ordinary."