A huge clear-up operation is under way at the site of a collapsed factory in the Pakistani city of Lahore, as hopes fade that more survivors can be found. 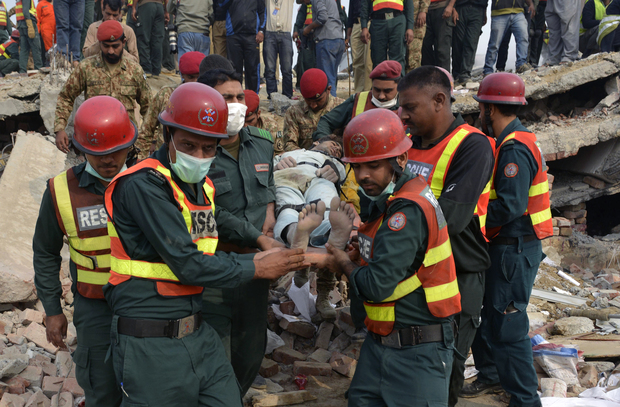 Pakistani rescuers move a man rescued from under the rubble of the collapsed factory. Photo: AFP

At least 21 people died when the plastic bag factory that was under construction collapsed on Wednesday.

Heavy machinery, diggers and drills are dismantling the building.

It is thought that between 150 and 200 people were inside the structure, with about 100 rescued so far. Officials have warned the death toll could rise.

The authorities have not officially ended the search for survivors.

Soldiers and emergency services say that the rescue effort required carefully cutting through steel and the use of cranes and other heavy machinery to remove tonnes of debris.

Rescuers have only managed to move rubble from the top two floors, he said, and the fear is that more workers were on the bottom floors at the time of the collapse.

Mr Zia insisted that there was still a chance survivors could be found. "Miracles can happen at any time and that's why we are moving slowly," he said.

It is not clear exactly how many people were in the building when it collapsed or how many - either alive or dead - may still be buried beneath the rubble at the Sundar industrial estate, about 45km south-west of Lahore's city centre.

Some reports say that as many as 200 people were inside - including underage workers and the owner.

'Crushed by a heap of concrete'

Factory employee Mohammad Navid told AFP that up to 50 shift workers may have been sleeping in a section of the building unreached by rescuers and that children as young as 12 were working there.

Other survivors quoted by the Reuters news agency said the factory's owner was adding a new floor to the building and had ignored advice from his contractor and pleas from his workers to stop the extension after cracks in the walls appeared following a powerful earthquake last week. 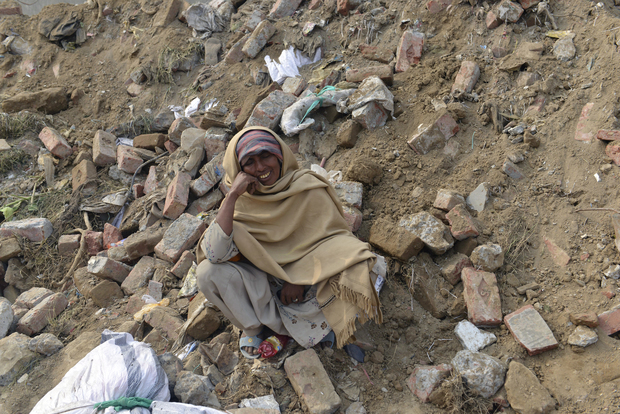 Pakistani woman Nasreen Bibi waits for news of her son missing under the rubble. Photo: AFP

Muhammad Ramzan, 22, one of the survivors, said that he saw cracks in the structure moments before the collapse.

"I immediately drew the owner's attention towards the cracks. He was watching them when the roof collapsed and I saw him being crushed by a heap of concrete that led to his death," he told Reuters.

Other survivors said they were able to give instructions as to their whereabouts beneath the debris by calling relatives on their mobile phones.

"I ran towards the stairs but they collapsed before I reached there and then the whole building collapsed," said 16-year-old Mohammad Asghar, who suffered a broken arm and a head injury.

"I stayed in touch with my father on [the] phone and was recovered after 13 hours."

The BBC's Shaimaa Khalil, who is at the scene of the disaster, says that it is hard to imagine how anyone could still be alive under the rubble.

Building safety levels are often below standard in Pakistan.

In September last year at least 24 people were killed in Lahore when the roof of a mosque collapsed.

At least 17 people - including children - were killed in a factory collapse following a gas explosion in a residential area of the city in February 2012.