The bodies of 144 of those killed in a plane crash in Egypt have been flown back to the Russian city of St Petersburg as an investigation into the cause continues. 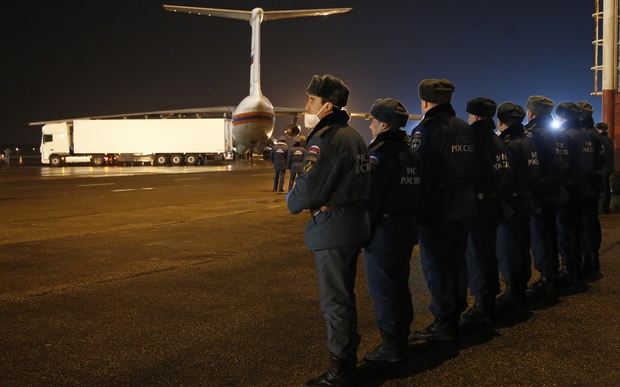 Russian Ministry for Emergency Situations employees prepare to load the bodies of the victims from the ministry's plane at the airport in St Petersburg. Photo: AFP

All 224 people on the Airbus 321 - most of them Russians - died when it came down over the northern Sinai peninsula.

The country observed a day of mourning on Sunday after its worst air disaster.

The Kogalymavia plane was carrying 217 passengers, including 25 children, Russian transport authorities said. There were seven crew members on board.

Four of the passengers were Ukrainian nationals and one was from Belarus.

Vehicles later began transporting the bodies to the city's crematorium for identification by the relatives.

A second flight with more bodies was expected to arrive in St Petersburg in the evening.

Russia said it will pay compensation to the victims' families and help organise funeral procedures.

The plane crashed early on Saturday, shortly after leaving the resort of Sharm el-Sheikh for the Russian city of St Petersburg.

Debris was found across a 20sq km-wide area of Sinai, officials said. So far 163 bodies have been recovered.

The plane's flight recorders have been found and sent for analysis.

Jihadists allied to so-called Islamic State (IS) in Sinai, where such groups are active, made a claim on social media that they had brought down flight KGL9268.

But Egyptian Prime Minister Sharif Ismail said experts had confirmed that a plane could not be downed at 9,450m, the altitude the Airbus 321 was flying at, by weapons the militants were known to possess.

IS has not produced pictures or video footage to substantiate its claim.

Analysis by BBC Monitoring found that a video purporting to show the downing of a plane did not appear to be an official IS clip, and was not shared on official IS channels.

A number of major airlines - Emirates, Air France-KLM, Lufthansa, and Qatar Airways - have decided not to fly over the Sinai Peninsula until more information is available.

Two smaller carriers, flydubai and Air Arabia, also said they would re-route flights, while Etihad Airways said it would avoid only "certain areas of airspace" over Sinai.

Germany's transport ministry has told German airlines not to follow the same route taken by the Russian plane.

British Airways said it regularly assessed the safety of its routes. BA said it would not confirm flight routes, but that it "would never fly a route unless it was safe to do so".

Russia's transport regulator said it would check all the airline's A321 planes, but Kogalymavia said this would not affect their operations.

Egypt's civil aviation minister Hossam Kamal said there had been no sign of any problems on board the flight, contradicting earlier reports that the pilot had asked to make an emergency landing.

An Egyptian ground service official who carried out a pre-flight inspection of the plane said the aircraft appeared to be in good shape.

"We are all shocked. It was a good plane. Everything checked out in 35 minutes," the official told AP.

However, the widow of the plane's co-pilot told Russian TV her husband had complained about the aircraft's technical condition.