A suicide bomber killed 16 people in Pakistan on Friday at a procession in Sindh province for the Shi'ite Muslim holiday of Ashura, police said. 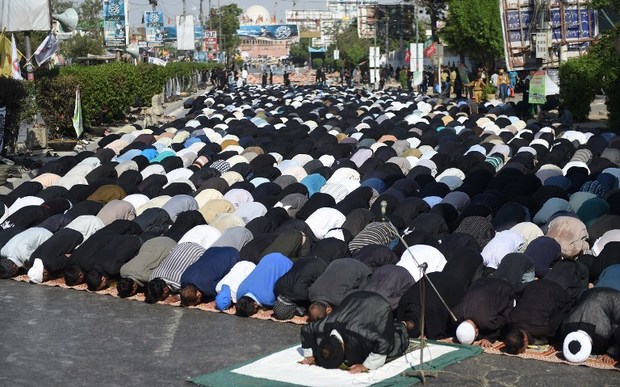 The blast, which also wounded dozens, was the second in two days to hit the festivities surrounding Ashura.

Fears of sectarian violence have been heightened this year since Taliban splinter groups pledged allegiance to Islamic State, a Sunni Muslim militant group based in Syria and Iraq that has repeatedly attacked Shi'ites. Analysts say Pakistani groups hoping for patronage want to impress Islamic State.

Local police official Muhammad Saeed said that 16 people including two children had been killed in the early evening blast in Jacobabad district, about 450 km (280 miles) north of the city of Karachi.

"Yes, it was a suicide attack on the procession," Saeed told Reuters by telephone.

A suicide bombing at a Shi'ite mosque in the southwestern province of Baluchistan on Thursday killed at least 10 people.

Security has been beefed up across Pakistan for the two days of Ashura. Shi'ites were holding public gatherings and marches in most major cities on Friday and Saturday to commemorate the death of Hussain, grandson of the Prophet Muhammad.

Mobile phone services were being suspended in major cities on both days in a bid to foil remote-controlled bombings. Police also set up extra checkpoints and restricted movement in some areas.

Shi'ite Muslims make up about 20 percent of Pakistan's population. The rest are mostly Sunni Muslims.

Lashkar-e-Jhangvi, which once enjoyed the support of Pakistan's powerful spy agency, the Directorate for Inter-Services Intelligence, has claimed responsibility for the deaths of hundreds of civilians, mostly Shi'ites.

Security forces have in recent years cracked down on the group, and killed its leader Malik Ishaq in July.

An LeJ spokesman, Usman Saifullah Kurd, told local newspapers on Friday that the group would "carry out suicide and other attacks, even on Ashura day."