Germany has insisted it was responsible for the Holocaust, after Israel's prime minister claimed a Palestinian leader told the Nazis to kill Europe's Jews. 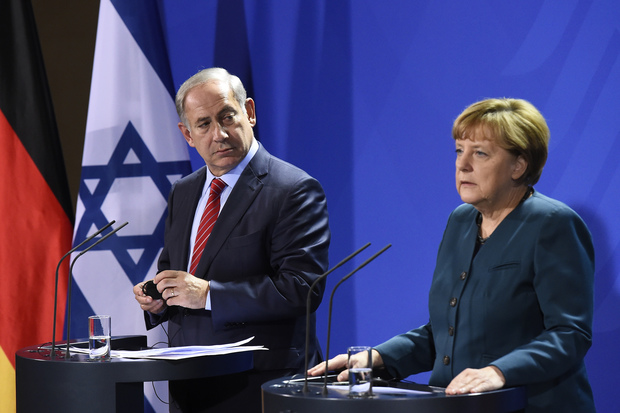 Chancellor Angela Merkel said Germans were "very clear in our minds" that the Nazis were responsible.

Benjamin Netanyahu had said Hitler had only wanted to expel Jews from Europe, but that Grand Mufti of Jerusalem Haj Amin al-Husseini told him: "Burn them."

His remarks have been condemned by Israeli historians and politicians.

Speaking alongside Mrs Merkel in Berlin, Mr Netanyahu said "no-one should deny that Hitler was responsible for the Holocaust".

But on Tuesday at a speech at the World Zionist Congress in Jerusalem, Mr Netanyahu claimed Haj Amin al-Husseini had provided the idea.

"Hitler didn't want to exterminate the Jews at the time - he wanted to expel the Jews," he told the congress.

"And Haj Amin al-Husseini went to Hitler and said: 'If you expel them, they'll all come here.'

Who was Haj Amin al-Husseini?

Husseini, who died in 1974, was a Palestinian nationalist leader who led violent campaigns against Jews and the British authorities in what was then British Mandate Palestine in the 1920s and 1930s.

He fled the territory in 1937, but continued his campaign to oppose British plans to partition it into a Jewish state and an Arab one, allying himself with the Nazis during World War II.

Husseini met Hitler in Berlin in November 1941, when he tried to persuade the Nazi leader to declare his support for the creation of an Arab state, according to German press reports at the time.

Husseini was sought for war crimes but never appeared at Nuremberg.

Mr Netanyahu's comments came amid a wave of stabbing and shooting attacks - several of them fatal - on Israelis by Palestinians, and one apparent revenge stabbing by an Israeli.

Israeli security forces have also clashed with rioting Palestinians, leading to deaths on the Palestinian side. The violence has also spread to the border with Gaza.

But the prime minister has faced a barrage of criticism at home for his remarks.

The chief historian at Israel's memorial to the Holocaust said they were factually incorrect.

"You cannot say that it was the mufti who gave Hitler the idea to kill or burn Jews," Professor Dina Porat from the Yad Vashem memorial told the newspaper Yedioth Ahronoth.

Opposition leader Isaac Herzog wrote on his Facebook page that the prime minister's remark "minimises the Holocaust, Nazism and... Hitler's part in our people's terrible disaster".

Palestine Liberation Organisation's Secretary General Saeb Erekat said in a statement: "It is a sad day in history when the leader of the Israeli government hates his neighbour so much that he is willing to absolve the most notorious war criminal in history, Adolf Hitler, of the murder of six million Jews."

How Israeli media reported the story