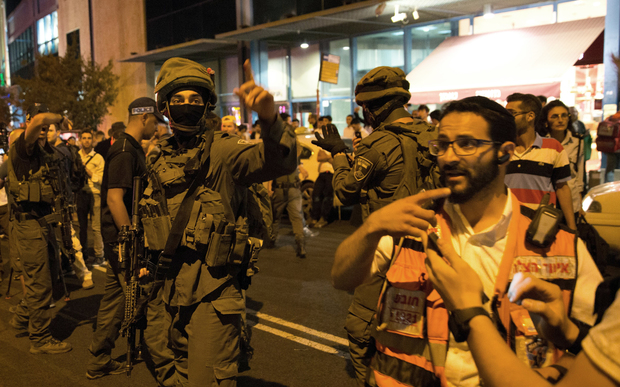 Israeli security forces, police and a medical team arrive at the site where a knife-wielding man stabbed and moderately wounded a woman near Jerusalem's central bus station on October 14, 2015. Photo: AFP

Two were killed in confrontations with Israeli troops over the Gaza border, medical sources said.

Also in the West Bank a Palestinian posing as a journalist who stabbed and injured a soldier was shot dead.

Violence between the two sides has spiralled, with near-daily stabbings by Palestinians of Israelis this month.

The upsurge began last month when tensions at a flashpoint holy site in Jerusalem revered by Jews and Muslims boiled over amid rumours Israel planned to relax long-standing rules to strengthen Jewish rights at the complex. Israel has repeatedly denied such claims.

The UN Security Council is holding an emergency meeting on the upsurge of violence.

Violent protests spread across parts of the West Bank on Friday, with clashes reported in Bethlehem, Ramallah, Tulkarm and Nablus, where a Palestinian was killed, Palestinian medical sources said.

Pictures from Bethlehem showed masked Palestinians throwing slingshots at troops from behind industrial bins, as soldiers fired tear gas to disperse them.

Similar scenes played out in other parts of the occupied territories.

In Gaza, protesters, some throwing stones, advanced towards the border fence with Israel when troops opened fire, reports say.

The Ministry of Health in Gaza said two Palestinians were killed in separate incidents, and dozens of other people injured.

It came on what Hamas, the Islamist group dominant in Gaza, had earlier declared a "day of rage" against Israel.

Dozens of Palestinians overran Joseph's Tomb, revered as the resting of the biblical figure, and where Jews go to pray.

Israel's military spokesman Lt Col Peter Lerner said the attack was "a blatant violation of the basic value of freedom of worship".

It came hours after Israeli Prime Minister Benjamin Netanyahu called on the Palestinian leadership to stop a wave of attacks.

Palestinian leader Mahmoud Abbas condemned the attack on the tomb as "illegal", adding that it "offends our culture and our religion and our values".

Elsewhere in the occupied West Bank, a Palestinian disguised as a news photographer stabbed and moderately wounded an Israeli soldier, the Israeli military said.

It said the Palestinian attacker was shot dead in the incident in the Jewish settlement of Kiryat Arba, next to Hebron.

The US Secretary of State John Kerry has said he planned to travel to the region in the next few days, amid reports that a meeting may take place in Jordan to include the Israeli and Palestinian leaders.