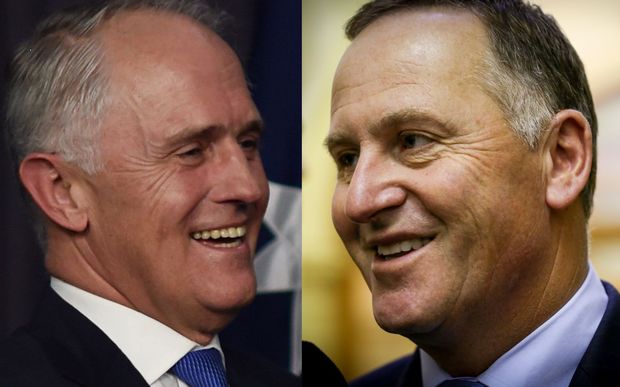 About 200 New Zealanders convicted of crimes have been placed in detention centres while they await deportation.

Mr Key said he believed only the most serious criminals should be deported, and people's ties to Australia should be taken into account.

He told Morning Report he was reasonably confident some change would happen.

The visit will be Mr Turnbull's first overseas trip as prime minister - he ousted Tony Abbott as the Australian Liberal Party leader nearly a month ago.

He said Mr Key needed to be very clear to Mr Turnbull that Australia's treatment of detainees was not acceptable.

"Rather than pussy-footing around, I think we need to be straight with the Australians," Mr Shaw said.

Labour Party leader Andrew Little, who will also have an official meeting with Mr Turnbull on Saturday, said it was acceptable for Mr Key to be assertive.

He said that was what New Zealanders wanted to see from Mr Key.

"He's got to lay it out very clearly," Mr Little said.

Mr Little hoped the meeting would result in genuine change, and was not just a back-slapping exercise between the two prime ministers.

Mr Shearer said retaliating against Australia by implementing a similar immigration policy would not improve matters.

In his own statement, Mr Turnbull said it was appropriate that his first destination was New Zealand, given the two nations' close relationship.

He said climate change would be one of a number of issues that would be discussed - as well as the movement of citizens between Australia and New Zealand.

Mr Turnbull will be travelling with his wife Lucy, and the pair will join Mr Key and his wife Bronagh for a private dinner on Friday evening before the official programme begins on Saturday.