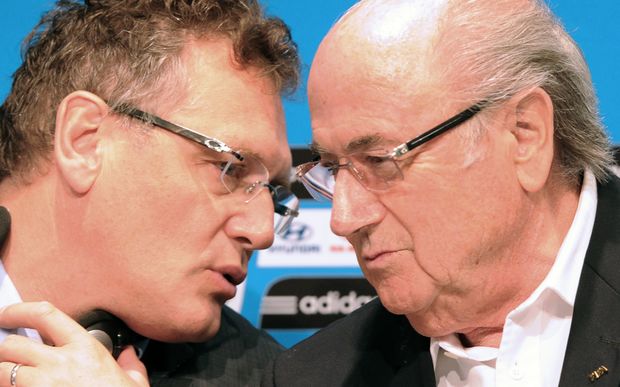 The punishments were handed out by the ethics committee of football's world governing body, which is investigating the three over corruption allegations.

The three are banned from any football activity in the interim. They deny any wrongdoing.

Hayatou has issued a statement saying he will serve on an interim basis and will not be standing for election. But Platini - and Chung - are still hoping to replace Blatter when he steps down as president in February.

A statement issued by Blatter's lawyers said the president was "disappointed" the ethics committee had not followed its own code in allowing him an opportunity to be heard, and claimed the suspension was based on "a misunderstanding of the actions of the attorney general in Switzerland".

It added: "President Blatter looks forward to the opportunity to present evidence that will demonstrate that he did not engage in any misconduct, criminal or otherwise."

Chung said he was not surprised by his ban, but described it "as a most blatant miscarriage of justice", adding that Fifa was "in total meltdown" and the investigation against him was "politically motivated" against his presidential campaign.

Fifa's ethics committee began its investigation into Blatter after the Swiss attorney general opened criminal proceedings against the 79-year-old.

He is accused of signing a contract "unfavourable" to Fifa and making a "disloyal payment" to Platini, who is also president of European football's governing body - Uefa.

The ethics committee also opened an inquiry into Platini over the 2m euros payment, which was made nine years after the 60-year-old carried out consultation work for Blatter.

Valcke was already on gardening leave from his Fifa post following newspaper allegations last month which implicated the 54-year-old in a scheme to profit from the sale of World Cup tickets.

Earlier this year, US authorities indicted 14 Fifa officials and associates on bribery and racketeering charges. A simultaneous Swiss investigation was started into the bidding process for the 2018 and 2022 World Cups.

Just two days later, on 29 May, Blatter won a fifth consecutive Fifa presidential election. However, on 2 June he announced his decision to step down in the wake of the corruption allegations.

He is due to finish his term at a Fifa extraordinary congress on 26 February. Platini and South Korean billionaire Chung - who was also fined 100,000 Swiss Francs by the ethics committee - are two of the leading candidates to replace him.

Before the imposition of his provisional ban - which relates to the bidding process for the 2018 and 2022 World Cups - Chung claimed Fifa's investigation into him was an attempt to "smear" his campaign.

Reports that the provisional bans for Blatter and Platini were to be handed down emerged late on Wednesday.

On Thursday, former France international footballer Platini issued a statement questioning how the information had been made public.

"This is clearly an extremely serious matter," he said. "This information appears to have come from an official Fifa source.

"This deliberate leak - which is insidious in nature and has come about in an unacceptable manner - is essentially an attempt to damage my reputation."

Platini added he was co-operating with the various authorities - and intended to continue standing for the Fifa presidency.

Valcke's lawyer also said that his client was "confident" that he will be fully cleared of the "false allegations" when "all the facts come out".