ANALYSIS: When a Muslim student brought a clock to school and was arrested, the powerful jumped to his defence. But if he hadn't been a charming boy would anyone have cared?

They really couldn't have picked a more sympathetic target if they had tried... https://t.co/NzzK7mZYBf

Renowned journalist Glenn Greenwald's tweet neatly summed up what quickly turned into a PR disaster for a small Texan school and its local police force as an awkward and bright-eyed 14-year-old boy stood with his parents at his side and the world listening. 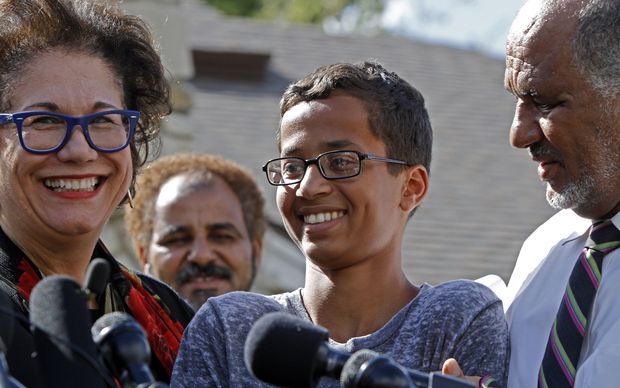 In a single day, Ahmed Mohamed went from a teenage science geek and hopeful inventor to the face of Islamophobia in America.

After bringing a homemade clock to class, the young Muslim was first told he shouldn't show it to anyone, then later was sent to the principal's office and arrested for making a "hoax bomb".

While the school refused to back down from its position, the story of Ahmed and his clock quickly became a viral sensation.

At a press conference outside his home, he described how he felt less than human. His quiet confidence and disarming grin as he told his peers to follow their dreams were in stark contrast to an earlier image that showed him handcuffed in a police station, looking confused and distressed and wearing a faded NASA t-shirt.

In the following hours the internet was flooded with well-wishers, his story shared by millions, with US presidential hopeful Hillary Clinton and Facebook founder Mark Zuckerberg among the many tweeting their support. He received internship offers and free gifts from the likes of the Massachusetts Institute of Technology (MIT), Twitter and Microsoft, all encouraging his young interest in science and technology. Most significant was the tweet from US President Barack Obama encouraging Ahmed to keep inventing, and extending an invitation to the White House.

Cool clock, Ahmed. Want to bring it to the White House? We should inspire more kids like you to like science. It's what makes America great.

In less than a day, his boyish innocence and well-articulated message that his fight wasn't "just for muslims...but for anybody who has been through this" had won the hearts and minds of people around the world. 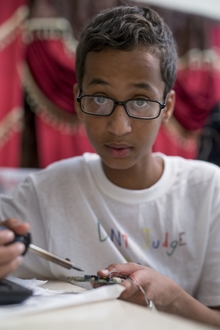 The Arab American Association for New York's spokesperson, Linda Sarsour, said the incident was an example of growing anti-Muslim sentiments which needed to be addressed, with or without a relatable protagonist.

"It should not require a perfect victim - like Ahmed - for us to finally declare that bigotry against an entire faith community is unacceptable," she said.

A story that flew under the radar last week was that of Moroccan Muslim man Younis Chekkouri. He was released from Guantanamo Bay 13 years after being detained without charge or trial, and five years after he was cleared. According to human rights group Reprieve, Chekkouri was working for a youth charity in Afghanistan when he was arrested by local authorities and sold to US forces in 2002.

In a letter to his lawyer, Chekkouri described his detention as a "dark hole", and said he had been a witness to an "insane" story. His contact with the president sits in stark contrast to Ahmed Mohamed's. "Imagine the hope we all felt when President Obama took office! We thought our pain was finally coming to an end," he said. Chekkouri returned to his native Morocco to be detained again, and is facing an uncertain future.

No one is likely to remember Younis Chekkouri. He certainly won't be getting an invite to the White House, or a scholarship to MIT, and his story won't be shared by millions on social media. He is not a sympathetic victim. He doesn't remind us of our little brother in science class, or ourselves, awkward and unsure in the heat of adolescence. Instead, he is a forgotten piece of the puzzle in a 14-year-old war.

Two weeks ago, the body of a three-year-old Syrian boy washed up on Turkish shores and momentarily silenced the world. The European refugee crisis was at a nail-biting impasse, with tens of thousands stranded at train stations, border crossings and in camps stretched too thin. Governments argued about what could be done and what was to be reasonably expected. Security was tightened and fences erected, amid fear about what an influx of migrants would do. 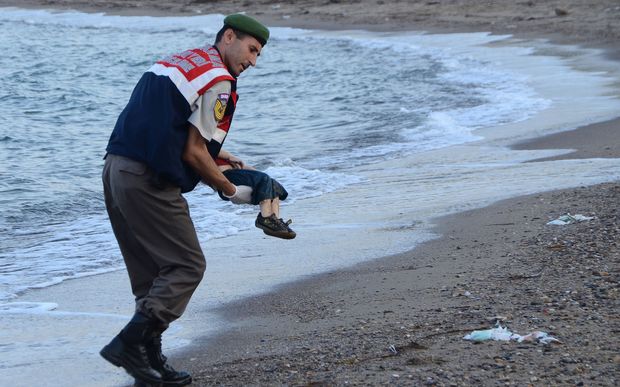 Then the image of Aylan Kurdi emerged, and suddenly everything appeared to be clear. There were rallies across the world, calls from world media outlets for action, and a sense of urgency that wasn't there before.

Within days, countries around the world, including New Zealand, had announced emergency refugee intake programmes.

But Aylan wasn't the first casualty of the crisis. Just a week earlier, 71 refugees were found dead in the back of a truck after they had suffocated attempting to cross into Austria. The Mediterranean Sea had claimed the lives of thousands more over the last year, including countless children. So, what had changed when a toddler with a bright red shirt joined that toll? Was he the perfect victim to hammer the gravity of the situation home? And if a photojournalist wasn't there on the beach that morning would anything have changed?

A few days afterwards, New Zealand First leader Winston Peters drew criticism when he suggested New Zealand should accept more women and children, but send men back to Syria and Iraq to fight for their freedom.

The point is that men, unlike Aylan, are not perfect victims of this tragedy. Neither is Ahmad Barghach, the Syrian father who has been desperately trying to bring his four children to New Zealand. His two sons were kidnapped and tortured in Yemen, while his daughters fled to Turkey. They could now wait up to a year for their applications to be processed by New Zealand immigration. And while an online petition calling for an increase of the refugee quota has surpassed 20,000 in under a week, a similar petition started by Barghach's family has failed to reach 300.

Perhaps people have become so desensitised by images of hardship on our screens that it takes something truly profound to urge us to action. The question now is whether we may be able to recognise the same human suffering in those who don't tug as sharply on our emotions - victims who may look very different to us, speak in foreign tongues and hold faiths we may not understand.