Video footage has emerged of a key suspect police want to question in connection with the deadly bomb blast in the Thai capital, Bangkok.

The footage, from a CCTV camera, shows a man in a yellow shirt leaving a backpack in the Erawan Hindu shrine.

At least 21 people died in Monday's blast, about half of them foreigners, and more than 120 were injured.

In a separate attack on Tuesday, an explosive device was thrown at a pier in Bangkok, but no one was hurt.

Nationals from China, Hong Kong, Britain, Indonesia, Malaysia and Singapore are among the foreigners killed in the attack. 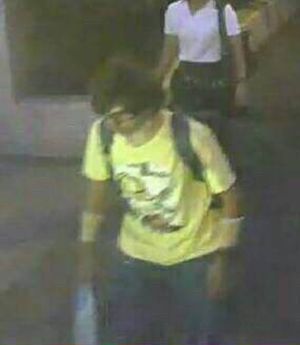 The suspect in the Bangkok bombing, carrying a backpack. Photo: AFP / Thai police

The suspect is shown in video footage carefully and deliberately removing his backpack inside the shrine, getting up without it and immediately leaving the scene.

The spot where he was sitting is precisely where the bomb went off a few minutes later, the BBC's Jonathan Head in Bangkok said.

"There is a suspect... we are looking for this guy," Prime Minister Prayuth Chan-ocha told reporters.

Authorities were "quite close" to identifying the suspect but it was too early to say whether a suspect was a foreign national. Thai government spokesman Maj Gen Weerachon Sukhontapatipak told the BBC, but other leads were also being pursued.

He said no motive was being ruled out, but that the bomber did not appear to be Thai and the character of the bombing was "quite different" from previous bombings by southern Thai insurgents.

He said security at transport hubs and tourist sites was being beefed up. 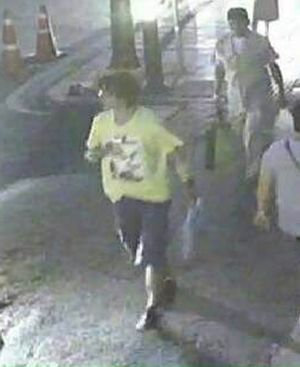 The suspect in the Bangkok bombing, without his backpack. Photo: AFP / Thai police

Mr Prayuth called it the "worst ever attack" on Thailand.

"There have been minor bombs or just noise, but this time they aim for innocent lives. They want to destroy our economy, our tourism."

In Tuesday's incident, a device - possibly a grenade - was reportedly thrown at the busy Sathorn pier in Bangkok.

It landed in water where it exploded harmlessly, but police said it could have caused many injuries.

In currency trading, the Thai baht fell to its lowest level in six years over concerns about the impact on tourism.