A high-flying stockbroker who ran with the 'Wolf of Wall Street' during the 1980s has been photographed sleeping on the streets of New York. 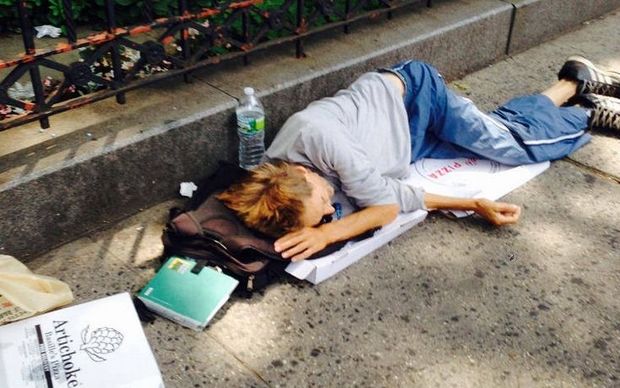 William 'Preston' King sleeps on the streets of New York, after once working as a high-flying stockbroker. Photo: Flickr / Sergeants Benevolent Association

In the 1980s, William "Preston" King worked for top companies like Merrill Lynch and Oppenheimer & Co. He partied with infamous stockbroker Jordan Belfort - known as the "Wolf of Wall Street" - while living in a Soho loft and driving a BMW.

But a new collection of photos assembled by the New York Police Department's sergeants union as part of a campaign to raise awareness of vagrancy in the city captured Mr King sleeping on empty pizza boxes on a Greenwich Village sidewalk.

Three decades of addiction had wiped out his fortune and left him estranged from his family, who were shocked to see him in the photo.

Younger sister Kristine King told The New York Post she had not seen her brother in months, since cutting ties with him when he stole from her. She said it was "heartbreaking" to see him sleeping on the street.

Ms King said he scored in the top 2 percent on the Series 7 stockbrokers exam and taught himself five languages, but got lost in a spiral of addiction over the past three decades.

With the help of the Sergeants Benevolent Association, which published the photo, she has taken to the streets to track her lost brother down.

The Post said that a friend who worked with Preston last year recalled sitting down with him to watch The Wolf of Wall Street, the film depiction of hedonism and corruption on Wall Street starring Leonardo DiCaprio.

"He's like, 'All right, I used to work with these guys,' " said Jesse Catlin. "He was giving me all the stories from the glory days."