Mexican President Enrique Pena Nieto wants a full investigation into the jailbreak of one of the country's top drug lords to determine whether any public officials helped him escape.

A major hunt is under way for Joaquin "El Chapo" Guzman who escaped from a maximum security prison using a 1.5 kilometre tunnel that had its own lighting and air supply. 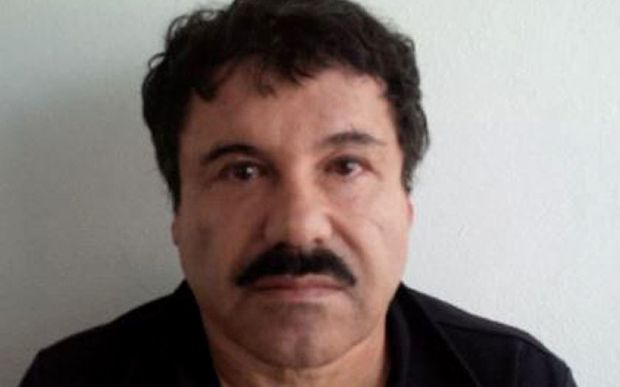 It is the second jailbreak for the 58-year-old, who paid guards to help him slip out of the high security Puente Grande prison near the city of Guadalajara in 2001, following a previous arrest in 1993.

After eluding capture for 13 years, Guzman was arrested in February 2014 in his home state of Sinaloa.

In the latest escape Guzman was seen on video entering his shower area at Altiplano prison, central Mexico, on Saturday evening, and was gone by the time guards entered his cell.

Beneath a 50cm by 50cm hole in the cell's shower area, guards found a ladder descending some 10 metres into the tunnel.

Inside the passage, guards found a motor bike mounted on rails probably used to cart off soil as well as equipment to aerate the tunnel.

The underground passage, 1.7 metres high and 70-80 centimetres wide, ended at an abandoned property near the local town.

Prison workers were quickly detained over the escape.

National Security Commissioner Monte Alejandro Rubido told a news conference 18 officials from the penitentiary had been taken in for interrogation at the unit specializing in organized crime at the Attorney General's office.

Security services called a meeting of their top officials, ordered a massive manhunt for El Chapo, or "Shorty", and shut down the airport in the nearby city of Toluca.

Guzman became one of the world's top crime bosses, running the powerful Sinaloa Cartel, which smuggled billions of dollars worth of cocaine, marijuana and methamphetamines into the United States and fought vicious turf wars with other Mexican gangs.

The breakout happened in the State of Mexico, the home state of President Pena Nieto, who took office in 2012 vowing to confront cartel violence that has killed more than 100,000 people since 2007.

Days after Guzman was captured in 2014, the president said another El Chapo escape must "never happen again."

Government officials vowed on Sunday that Guzman would be recaptured, and security forces fanned out to search roads near the prison, which is some 90 km west of the capital.

The president said he every confidence Guzman will be recaptured but said an investigation was needed to establish whether any public officials were involved in helping him escape.