One of the world's most wanted drug barons, Joaquin Guzman, known as El Chapo or "Shorty", has been arrested in Mexico.

He was the leader of the Sinaloa cartel, which smuggles huge amounts of illegal drugs into the US. 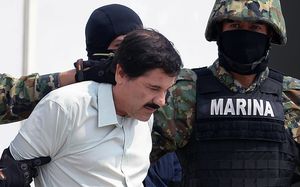 Shorty Guzman had been on the run since escaping a high security prison in a laundry basket in 2001.

He was arrested in Sinaloa state, in a joint operation with American anti-drugs forces.

Mexican President Enrique Pena Nieto used his Twitter account to praise the forces involved in Guzman's arrest in the north-western resort of Mazatlan, in his home state of Sinaloa.

Guzman has been taken to Mexico City and paraded before the media at a navy hangar, before boarding a helicopter surrounded by heavily armed troops.

He was taken straight to prison.

The US state department had offered a reward of up to $US5 m for information leading to his arrest.

He has been indicted in the US on federal trafficking charges and US officials want him extradited.

The Sinaloa cartel controls much of the flow of cocaine, marijuana and methamphetamine to the United States.

Nearly 80,000 people have died in drug-related killings in Mexico since 2007 when the president sent in the army to try to quell the powerful drug bosses.