Greek voters' overwhelming rejection of bailout conditions has thrown the future of the country's eurozone membership into further doubt and deepened a stand-off with lenders. 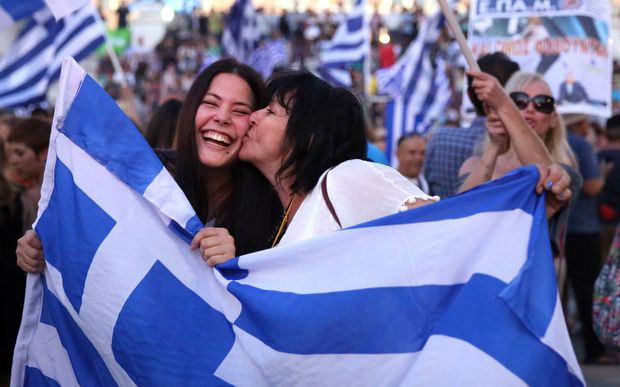 Euphoria among the 'no' vote camp - but what next for Greece? Photo: AFP

Stunned European leaders called a summit for Tuesday to discuss their next move after the surprisingly strong victory by the 'no' camp defied opinion polls that had predicted a tight contest.

The euro and stock prices fell sharply at the market open in Asia on Monday but then recovered some of their losses, with dealers emphasising that markets were orderly and showing no signs of financial strain.

European stock and bond markets were expected to take a hit when they opened for trading later on Monday.

In Athens, thousands of jubilant Greeks waving flags and bursting fire crackers poured into the city's central square as official figures showed almost two-thirds of voters had rejected a deal that would have imposed more austerity measures on an already ravaged economy.

"You made a very brave choice," Prime Minister Alexis Tsipras said in a televised address. "The mandate you gave me is not the mandate of a rupture with Europe, but a mandate to strengthen our negotiating position to seek a viable solution."

Mr Tsipras called for "a strong national front" to negotiate a way out of the country's debt crisis. 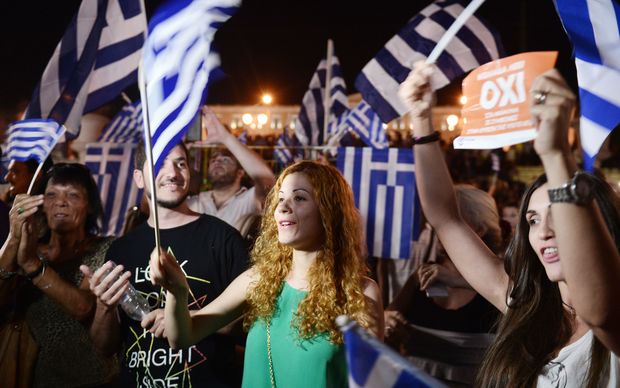 People celebrate in Athens after the first exit-polls of the Greek referendum. Photo: AFP

However, German Chancellor Angela Merkel's deputy said Greece had wrecked any hope of compromise with its eurozone partners by overwhelmingly rejecting further austerity.

The remarks reflected calls in the most powerful EU country, which is also Greece's biggest creditor, to cut Athens loose from Europe's common currency.

But it was not clear whether Ms Merkel, who has repeatedly said she wants to keep Greece in the eurozone, would shift to a hard line.

Greece's governing Syriza party had campaigned for a 'no', saying the bailout terms were humiliating but opponents warned this could see Greece ejected from the eurozone. 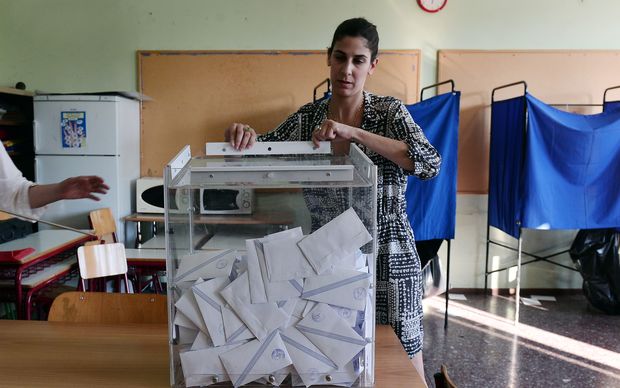 "Firstly, the government now has a new popular mandate and the second is the latest [International Monetary Fund] report which says that the Greek debt is unsustainable."

Greece had been locked in negotiations with its creditors for months when the Greek government unexpectedly called a referendum on the terms it was being offered.

Banks have been shut and capital controls in place since last Monday, after the European Central Bank declined to give Greece more emergency funding. Withdrawals at cash machines have been limited to €60 per day.

The European Commission - one of the "troika" of creditors along with the IMF and the European Central Bank - wanted Athens to raise taxes and slash welfare spending to meet its debt obligations.

Greece's Syriza-led government, which was elected in January on an anti-austerity platform, said it had been presented with an "ultimatum".

New Zealand Prime Minster John Key said the result was likely to be the end of the euro for Greece.

Mr Key told Morning Report if Greece was saying no to austerity measures, it should expect that decision to impact on the use of the euro.

"Something's got to give and it's hard to believe, that the German taxpayers will be paying the bill for Greece." 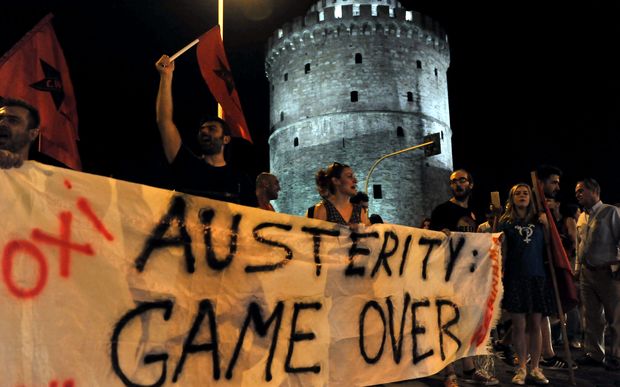 "Should the agreement plan submitted by the European Commission, the European Central Bank and the International Monetary Fund to the Eurogroup of 25 June, 2015, and comprised of two parts which make up their joint proposal, be accepted? The first document is titled "Reforms for the completion of the current programme and beyond" and the second "Preliminary debt sustainability analysis".

Voters had to check one of two boxes - "not approved/no" or, below it, "approved/yes"