Sepp Blatter has retained the presidency of world football's governing body, FIFA, which is in the midst of a corruption crisis. 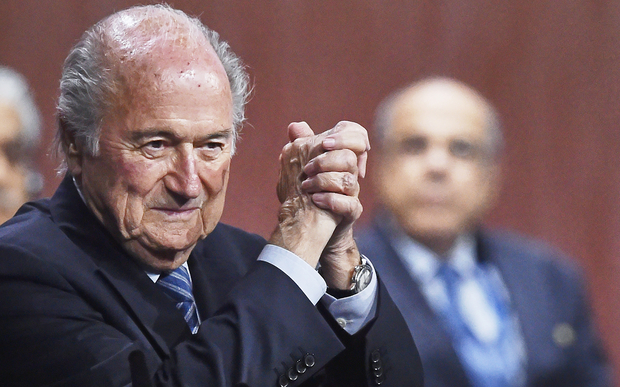 Sepp Blatter reacts after his re-election as president at the FIFA Congress in Zurich. Photo: AFP

Despite calls for him to step down from many member countries including the US, Australia, New Zealand and European football federation UEFA, Mr Blatter won the first round of voting in Zurich by 133 votes to 73.

That was not quite the two-thirds majority required but Mr Blatter's opponent, Jordan's Prince Ali Bin Al Hussein, withdrew before a second round could take place.

Nine senior FIFA officials and five others have been indicted this week on multimillion-dollar corruption charges, and in his acceptance speech, Mr Blatter pledged to restore the FIFA's reputation.

"I take the responsibility to bring back FIFA... I'm convinced we can do it."

In conceding, Prince Ali said: "It's been a wonderful journey... And I want to thank in particular those of you who were brave enough to support me."

UEFA President Michel Platini said: "I am proud that UEFA has defended and supported a movement for change at FIFA, change which in my opinion is crucial if this organisation is to regain its credibility."

Prince Ali (left) is greeted by UEFA President Michel Platini before the start of the FIFA Congress. Photo: AFP

The two candidates had earlier delivered their final appeals before the election.

Prince Ali, 39, said that questions had been raised in recent days "about whether our FIFA family is morally bankrupt".

He said: "There are no easy answers and no blame that can be cast that will wash away the stain that marks us all."

Mr Blatter said: "I am being held accountable for the current storm - so be it, I will shoulder the responsibility. I will take it upon myself and I want to fix FIFA together with you."

The vote comes two days after seven top officials were held in Zurich in a US fraud inquiry that indicted 14 people.

They are accused of bribery, racketeering and money-laundering involving tens of millions of dollars since 1991.

The aim of the bribes was to influence the outcome of bids to stage football tournaments such as the 2010 World Cup in South Africa and the 2016 Copa America in the US, prosecutors say.

Swiss prosecutors have launched a separate investigation into the bidding process for the World Cup tournaments in 2018 in Russia and 2022 in Qatar.

Many of FIFA's major sponsors, including Coca-Cola, Visa, Adidas, McDonald's, Hyundai Motor and Budweiser, have expressed concern over the investigations.