The governing People's Party (PP) seems to have won the most votes, but it may have lost Madrid city council for the first time in 20 years.

The Spanish economy has been a key concern for voters, and many are enraged over public spending cuts and reports of political corruption.

Prime Minister Mariano Rajoy's administration and the previous Socialist (PSOE) government are both seen as being to blame.

Spain has now officially come out of recession.

Preliminary results show that the PP is on course to win the most votes nationally with 26.2 percent. The PSOE is expected to come a close second with 25.5 percent of the vote.

In the capital, the PP won the municipal election but could still lose control of the city council.

The ruling party took 21 seats but Ahora Madrid, backed by the leftist anti-corruption party Podemos, took 20. Ahora Madrid could now form a coalition with the Socialists who came third.

Anti-eviction activist Ada Colau has also won the most votes in the mayoral race for Barcelona, Spain's second largest city.

"I want to be a mayor at the service of the people, so there will never again be first-class citizens and second-class citizens in this town," she said, as quoted by El Pais newspaper.

Last year was the first time there has been full-year economic growth in Spain since 2008, when a property bubble burst, putting millions of people out of work and pushing the country to the brink of a bail-out.

But unemployment remains high - nearly one in four workers is without a job - boosted by the government's labour reforms which reduced the cost of hiring and firing.

Like Podemos, pro-business Ciudadanos campaigned on an anti-corruption platform. 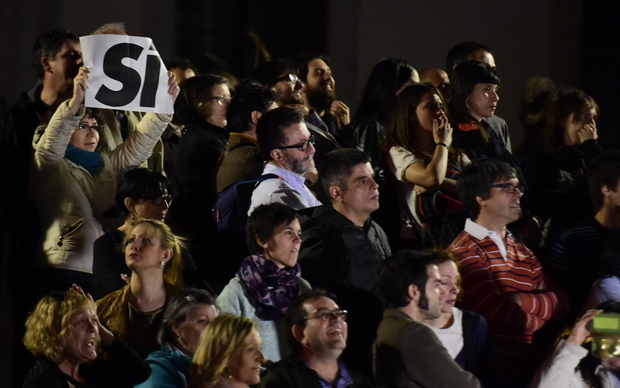 More than 8,000 councils are up for grabs, with the vote seen as a key indicator for national elections later this year.

Turnout was marginally higher than in the last election, in 2007.

Few parties are expected to win majorities, meaning many localities could have governing coalitions, something unfamiliar in Spain, where the PP and the Socialists have dominated for decades.