Thailand, Malaysia and Indonesia have urged other countries to join them as they abandon a policy of turning back asylum seeker boats and offer refuge to thousands of people.

The three countries have held a crisis meeting of all three countries' foreign ministers in Kuala Lumpur to decide what to do with the migrants, who are mostly Rohingya Muslims from Myanmar who have fled persecution and poverty at home and now face sickness and starvation at sea.

Thailand was initially absent when it came to announcing the deal. 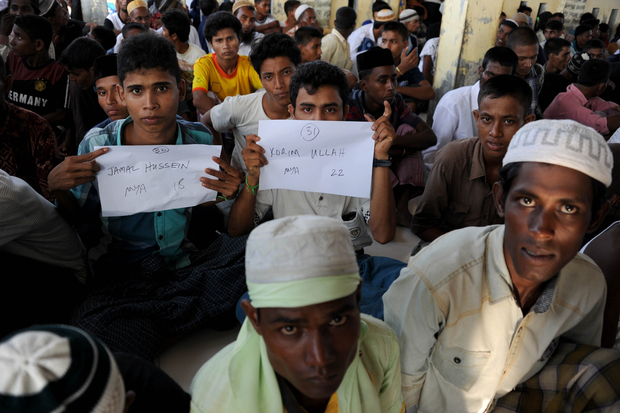 Rescued Myanmarese, part of a group of mostly Rohingyas from Myanmar and Bangladesh, in Aceh. Photo: AFP

Nearly 3,000 Bangladeshi and Rohingya refugees have come to shore in recent weeks, but many have been turned away.

Malaysia's Foreign Minister Anifah Aman announced the policy change after emergency talks in Kuala Lumpur with his Indonesian and Thai counterparts on the growing humanitarian crisis.

Thailand earlier failed to join its neighbours in their commitment to shelter the refugees but later said it too would no longer push back boats stranded in its territorial waters. It also said it would continue to provide humanitarian assistance.

Rights groups, who have repeatedly called on the governments of the three nations to prioritise saving the lives of those on board, have welcomed Wednesday's announcement.

The UN refugee agency, UNHCR, said it was "an important step" in resolving the crisis, but warned it was "urgent for people to be brought to shore without delay" for medical attention.

International Organisation for Migration spokesman Jeff Labovitz said the immediate offer of help would save lives by getting thousands of people off the high seas to safety.