Islamic State fighters have overrun the western Iraqi city of Ramadi and most Iraqi troops have reportedly abandoned their positions.

After weeks of fierce fighting, the last remaining Iraqi special forces have retreated to a key army base and the edge of the city where they are said to be surrounded. 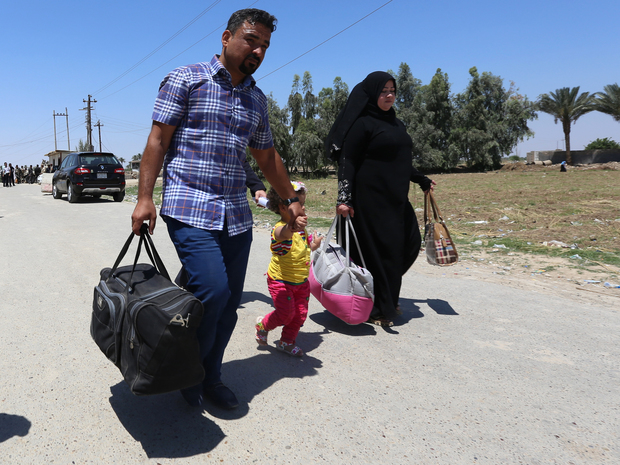 Residents from the city of Ramadi flee their homes as Islamic State tightened its siege on the city. Photo: AFP

The Iraqi forces' commander has pleaded for help from Iraqi prime minister Haider al-Abadi but also admitted it was too late to send reinforcements.

IS jihadists now control most of the western provincial capital, with their black flag on the local government headquarters in the centre of the city.

Mr al-Abadi urged government forces to hold fast in Ramadi and prevent IS from making further gains, saying they would have air cover and Shi'ite militia reinforcements.

The effective loss of the capital of Iraq's largest province of Anbar marked one of Baghdad's worst setbacks since it began a nationwide offensive last year to reclaim territory lost to the jihadists in June 2014.

IS said in an internet post it fully controlled Ramadi, after a local official admitted the operations command centre there had fallen.

"God has enabled the soldiers of the caliphate to cleanse all of Ramadi... after storming the 8th brigade. They (now) control it along with a battalion of tanks and missile launchers and in addition to the Anbar operations command," the IS statement said.

Muhannad Haimour, spokesperson and adviser to the provincial governor, said "Anbar operations command has been cleared".

The International Organisation for Migration said two days of fighting in Ramadi had displaced around 8000 people.

Mr Haimour said at least 500 people, both civilians and military, were killed in the jihadist offensive.

The jihadists used a wave of suicide car bombings to take most of the city and raised their black flag over the provincial headquarters.

Taking full control of Ramadi, some 100 kms west of Baghdad, would be the most significant victory this year for IS, which has suffered a string of setbacks elsewhere in Iraq and Syria.