Police in Japan have arrested a man who they say landed a small drone aircraft - containing radioactive sand - on the roof of the prime minister's office. 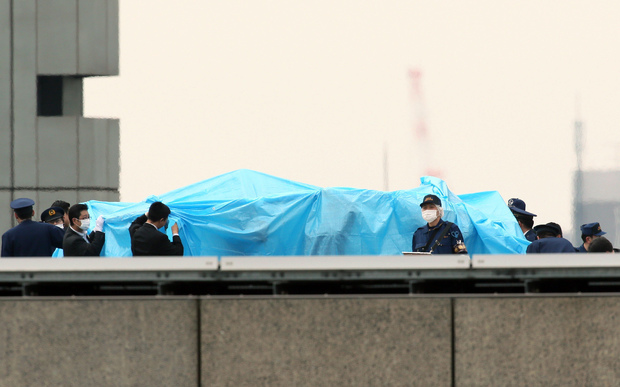 Staff at the official residence discovered the 50cm craft on top of the five-storey structure on Wednesday (local time). Photo: AFP

Yasuo Yamamoto, who was protesting over the Japanese government's nuclear energy policy, turned himself in late on Friday (local time), police said.

Media in Japan report that Mr Yamamoto, 40, comes from the Fukui prefecture, which is still suffering from the after-effects of the Fukushima nuclear power plant disaster in 2011.

No-one was hurt in the incident and Prime Minister Shinzo Abe was out of the country.

The drone landing triggered a security alert and raised fears of extremists using drones to carry out attacks.

The small amount of sand in the drone, which was equipped with a small camera, carried traces of radiation.

Police said the radioactive material was likely to be caesium but the levels were too low to be harmful to human health.

Japan does not yet regulate regulate low-altitude drone flights except around airports. However, officials are looking into changing the law as the remote-controlled devices become more popular.

Japan shut down all 48 of its nuclear power plants after the tsunami and earthquake in March 2011 which wrecked the Fukushima power plant.

Previously, about 30 percent of Japan's power was nuclear-generated.

Mr Abe has lobbied for a restart, arguing that the shutdown has hurt the economy by forcing Japan to import expensive fossil fuels to make up the power shortfall.

But public anxiety about the safety of nuclear power remains high.

None of the plants has yet re-started. However, a court last week rejected an attempt by local residents to halt the restart of two nuclear reactors at the Sendai plant in Kagoshima, in south-west Japan.