With its economy led by tourism, experts say Vanuatu could take years to return to the growth it has been enjoying for the past decade. 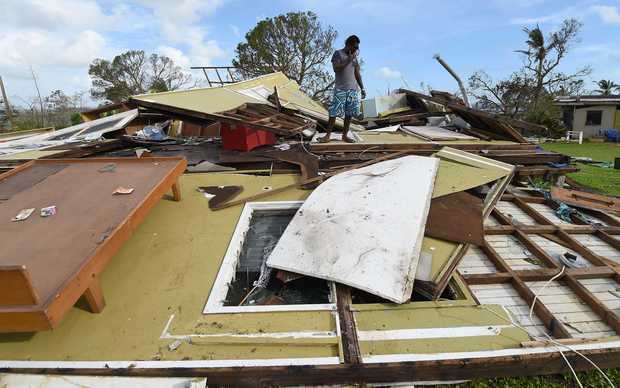 A Port Vila resident picks through the wreckage of his home. Photo: AFP

The category five Cyclone Pam ripped through resorts, worker's homes, destroyed crops and roads, and means it will be months until many businesses can even function properly.

As the people of Vanuatu count their blessings that they survived the cyclone, longer-term issues like its effect on the economy are only just starting to register.

"Since the latest agricultural census, we know that most of the people in Vanuatu are focusing on cash crops, and are buying their food in the stores or the co-operatives in the villages."

He said with no crops to sell, islanders will not able to buy the imported goods they have come to rely on.

The Tourism Councillor on the Vanuatu Chamber of Commerce, Bryan Death, said islanders who usually sell their food at the market, or on the side of the road, will probably just have to eat what they have left from their crops.

"Of the cash economy of the fresh fruit markets, and with all the crops being wiped out, and transportation, and movement of that, there won't be anything to transport into the marker to sell, so fresh food's going to be at a premium."

Tourism makes up 25 percent of the Vanuatu economy.

Mr Death, who owns a resort and holiday apartments, said as soon as the power was back on, he would get business from aid workers needing a place to stay, but it could take be months before the tourists are back.

"The economic impact isn't just on the tourism operators: it's on their staff, their families, you know, it just trickles down the chain."

Victoria University Professor and Pacific Correspondent for The EconomisttJon Fraenkel was hopeful it would not take long for business to return for tourism operators.

"Well, obviously there is going to be a period where it is going to be inadvisable for tourists to travel to Vanuatu, and there's also going to be infrastructural damage, but other than that I would have thought that the tourism industry will bounce back reasonable quickly."

But, after almost a decade of growth, Asian Development Bank economist Milovan Lucich said it may actually take years for the Vanuatu economy to recover.

He said growth was led by tourism, real estate and agriculture business that has now been severely disrupted by the cyclone.

"We will expect to pick up in growth later in the year, as some of the spending on infrastructure pics up, and some of the reconstruction spending gets underway."

Mr Luchich said despite an expected boost from the rebuild, the cyclone will still have a severe negative impact on the country's growth this year.