Cyclone Pam is now classified as an intense extra-tropical cyclone but is still having an impact as it tracks south-eastwards past the north and east cast of the North Island. 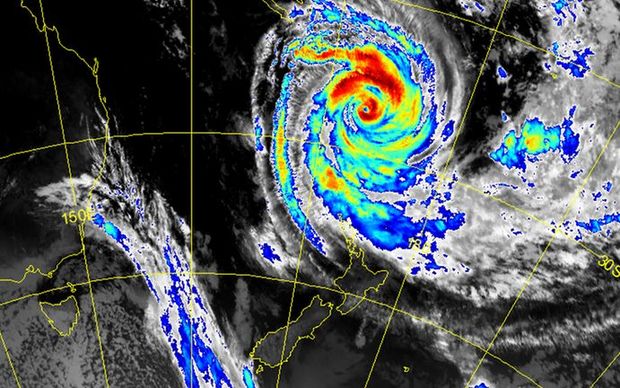 The Ministry of Civil Defence said large, possibly damaging waves and strong winds are being experienced on the east coast of the North Island, especially from Hawkes Bay to Cape Reinga. The ministry has activated the National Crisis Management Centre (NCMC).

MFAT has urged all New Zealanders to defer all non-essential travel to Vanuatu, while those already there are advised to follow the advice of local authorities and exercise heightened awareness about their safety.

The animation below is produced by Cameron Beccario using earth data from the Global Forecast System, operated by the US National Weather Service.

Except in the case of an emergency, motorists are advised to stay off the roads along the coastline of eastern Northland, which look likely to be hit hard by the approaching storm.

Air New Zealand will offer passengers holding flights to Fiji, Noumea or Vanuatu on Monday or Tuesday a change of dates or credit. Flights scheduled to depart on Sunday had been postponed to Monday, but look likely to be postponed further.

Civil Defence advises Aucklanders to exercise caution, particularly those north of Whangaparoa and Great Barrier Island, as there is a high chance of river and stream flooding, strong winds, large swells, and coastal erosion. Local power cuts are also a possibility.

To avoid expected traffic disruption, Aucklanders are advised to reconsider their travel plans and work from home if possible or delay their travel time, as surface flooding and slips are expected from tonight until Tuesday.

In the event of severe weather, Civil Defence advises remaining at home and off the roads unless absolutely necessary.

Coastal erosion is expected in low-lying communities north of Whangaparaoa at high tide on Monday, at 4am and 4:15pm, with the highest risk at Orewa, Leigh, Omaha, Point Wells, Whangateau and Waiwera.

Northland can expect heavy rain throughout until Monday morning, with a total of 80 to 100mm of rain between midday Sunday and 6am Monday.

Rivers and streams in these areas will rise rapidly, and localised surface flooding and slips are likely, causing hazardous driving conditions.

Coastal settlements in the Hawkes Bay are most likely to be affected by severe weather.

People expecting to travel to and from Gisborne tomorrow are urged to stay put for another day.

Three Gisborne schools, including Awapuni School, will not open tomorrow.

Heavy rain is expected about Gisborne, the ranges of northern Hawkes Bay and eastern Bay of Plenty, particularly in the areas north of Napier, with peak intensities of 25mm of rain per hour about the northern ranges.

The worst of the cyclone, expected to hit the east cape about lunchtime tomorrow, could see swells of up to nine metres just north of Tologa Bay.

Severe southeast gales are forecast for Monday, with gusts up to 160km/h in exposed places.

Winds of this strength are likely to cause damage to trees and powerlines, and could lift roofs and make for hazardous driving conditions.

Southeasterlies are expected to rise to gales, then to severe gales up to 120km/h, before tending southerly and weakening by Monday morning.

The origin of a cyclone

Tropical cyclones form over the warm ocean waters near the equator. Heated air near the surface of the ocean rises creating a low pressure zone which is then filled with air from the surrounding area. The new air is heated and rises, and this cycle continues until a cyclone forms. The video below shows how Cyclone Pam formed and has increased in size over the last seven days.

For local information, Gisborne Civil Defence and Emergency Management will broadcast over these stations:

Those in affected areas are advised to keep a close eye on MetService and Civil Defence websites for up-to-the-minute information.