A solar-powered plane has completed the first leg of a record-breaking attempt to fly around the world. 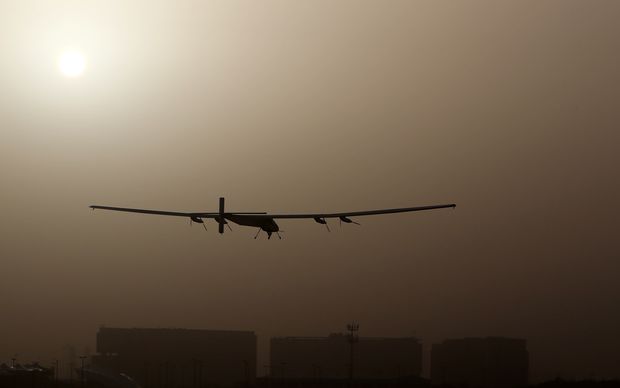 With businessman and pilot Andre Borschbeg at the controls, the aircraft touched down in Oman about 12 hours after taking off from Abu Dhabi.

The next leg of what's expected to be a five-month journey will take it to India. 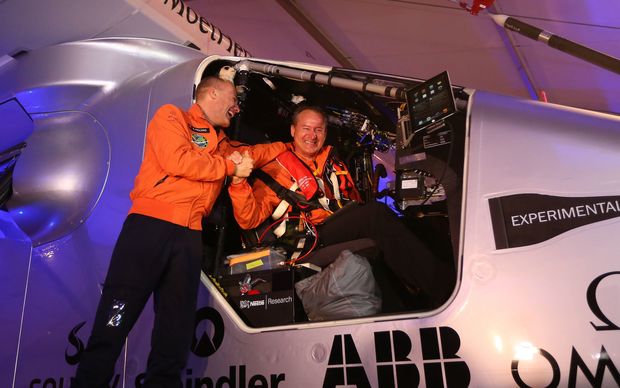 Bertrand Piccard (left) with Andre Borschberg who piloted Solar Impulse 2 on the first leg of the journey. Photo: AFP

The lightweight carbon fibre aircraft weighs only 2.3 tonnes, about the same as a family car and less than 1 percent of the weight of an Airbus A380 superjumbo.

Powered by more than 17,000 solar cells built into its -metre wings, Solar Impulse 2 is the first solar-powered aircraft able to stay aloft for several days and nights.The wings, at 72 metres, are longer than a jumbo and approaching that of the A380.

Over the next five months, it will skip from continent to continent, crossing both the Pacific and Atlantic oceans.

Mr Borschberg will share the pilot duties in due course with fellow Swiss, Bertrand Piccard. The plane can hold only one person and is able to fly on autopilot during rest breaks.

The plan is stop off at various locations around the globe, to rest and to carry out maintenance, and also to spread a campaigning message about clean technologies.

From Muscat, the plane it will make 12 stops on an epic journey spread over five months, with a total flight time of around 25 days.

It will cross the Arabian Sea to India before heading on to Myanmar, China, Hawaii and New York.

Landings are also earmarked for the midwestern United States and either southern Europe or North Africa, depending on weather conditions.

The longest single leg will see a lone pilot fly non-stop for five days across the Pacific Ocean between Nanjing, China and Hawaii, a distance of 8500 kilometres.