The solar powered aircraft attempting an around-the-world flight took off from Abu Dhabi this afternoon and is flying east initially to Oman. 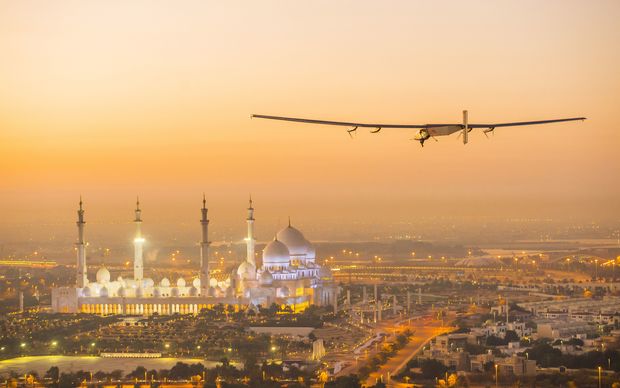 The one-seater plane has wings, covered with solar panels, as big as those of a jumbo jet, but the plane weighs the same as a family car.

Over the next five months, it will skip from continent to continent, crossing both the Pacific and Atlantic oceans in the process.

Swiss adventurers Bertrand Piccard and Andre Borschberg will share the pilot duties in the single-seater vehicle.

They will stop off at various locations to rest and to carry out maintenance, and also to spread a campaigning message about clean technologies.

Whoever is at the controls will have to stay alert for nearly all of the time they are airborne, and endure the physical discomfort of being confined in a cockpit that measures just 3.8 cubic metres in volume..

They will be permitted only catnaps of up to 20 minutes - in the same way a single-handed, round-the-world yachtsman would catch small periods of sleep.

Andre Borschberg will start the journey with a takeoff from the Emirate's international airport at about 06:30 local time.

"I am confident we have a very special aeroplane, and it will have to be to get us across the big oceans," the Solar Impulse chief executive told the BBC.

"We may have to fly for five days and five nights to do that, and it will be a challenge.

"But we have the next two months, as we fly the legs to China, to train and prepare ourselves."

The project has already set a number of world records for solar-powered flight, including making a high-profile transit of the US in 2013.

But the round-the-world venture is altogether more dramatic and daunting, and has required the construction of an even bigger plane than the prototype, Solar Impulse-1.

Its light weight, the performance of the 17,000 solar cells that line the top of the wings, and the energy-dense lithium-ion batteries it will use to sustain night-time flying will be critical to its success.

Operating through darkness will be particularly important when the men have to cross the Pacific and the Atlantic. The slow speed of their prop-driven plane means these legs will take several days and nights of non-stop flying to complete.