Australia's Prime Minister Tony Abbott has requested a phone call with his Indonesian counterpart to make a last-minute plea for mercy for the two Australians on death row.

Andrew Chan and Myuran Sukumaran have been transferred to isolation cells to await news of the timing of their execution.

It is understood Foreign Minister Julie Bishop's eleventh-hour bid to save them through a prisoner swap had earlier failed.

Mr Abbott told reporters he is now seeking another chance to plead their case.

Earlier he attended a dawn candlelight vigil for the two inmates on the forecourt of parliament in Canberra. 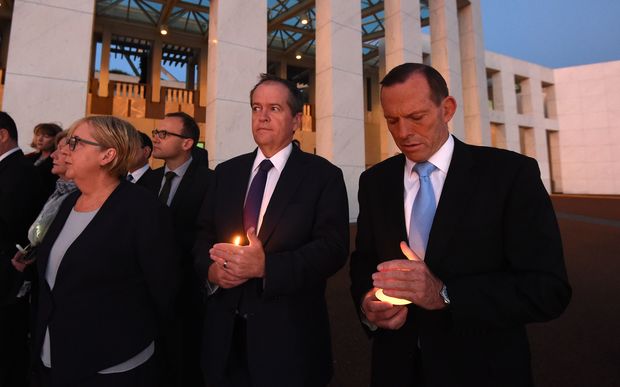 Organised by the Australian Parliamentarians against the Death Penalty, co-chaired by veteran Liberal MP Philip Ruddock, politicians and the public are calling for the Bali Nine pair to be spared from execution.

The two Australians on Wednesday spent their first night on Indonesia's "death island" Nusakambangan, after being transferred from the Bali jail that has been their home for the past decade.

The pair don't know how long they will wait to face the firing squad, but Indonesian President Joko Widodo has said they will not be executed this week.

Mr Abbott has repeatedly asked Jakarta not to enforce the death penalty and says he is revolted by the prospect of the men being killed.

Speaking at the vigil outside Parliament House this morning, Ms Bishop again asked Indonesia to show mercy to the two men.

"First, there are still legal avenues open to the men and an appeal is being sought before the state administrative court.

"Secondly, there are allegations being considered by their judicial commission regarding bribery charges arising from the original trial.

"But most importantly the concepts of mercy and forgiveness have as big a place in Indonesian law as they do in Australian law.

"And we ask that their remorse be taken into account."

Earlier, Mr Widodo said he had a constitutional responsibility to follow through with the executions.

"I as the President have to follow the constitution which still allows executions. And their verdicts have already been decided by the court," Mr Widodo told Al Jazeera.