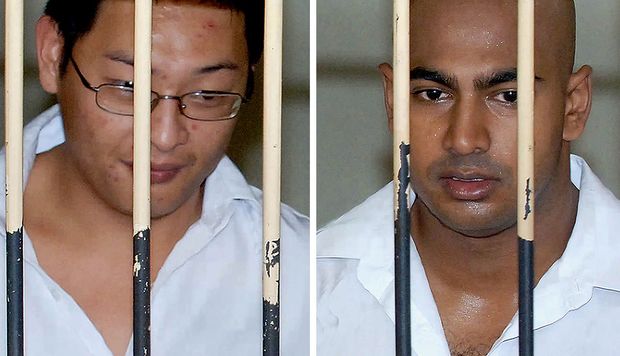 Chan and Sukumaran finished their journey to the port of Cilacap shortly before 9:00am (local time), after being taken out of Bali's Kerobokan prison in a police armoured vehicle before dawn this morning.

The men were put on a chartered plane at Bali's Denpasar airport, which landed in Java, and driven to Cilacap, where they were put on a ferry for the short journey to the Nusakambangan island prison, where they are due to be executed.

Their transfer, in paramilitary vehicles with a helicopter overhead and elite guards, was a relative show of strength compared to the third prisoner transferred today - an Indonesian drug trafficker who came in a little van.

An announcement on the timing of the executions could be made within hours or days, but Indonesian attorney-general Muhammad Prasetyo is required to give them 72 hours' notice.

Mr Prasetyo told local reporters that several things were still being organised and his office was always checking on progress in the field.

The attorney-general said the process would be carried through properly and not rushed, and that was why no execution date had been set.

Mr Prasetyo said some of those on the list to be executed were yet to be moved to Nusakambangan. 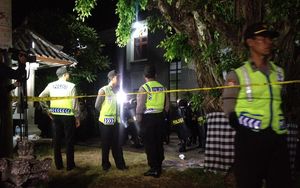 Indonesian riot police outside Kerobokan prison in Bali before the prison transfer of Andrew Chan and Myuran Sukumaran. Photo: AAP

Just minutes before the duo left their Bali prison this morning, Chan's brother Michael turned up at the gates and attempted to be allowed inside, but he was denied access.

Prime Minister Tony Abbott said the Government was "revolted" by the prospect of the two men being killed and was continuing to press Indonesia for a stay of execution.

"I think right now millions of Australians are feeling sick in their guts at the prospect of execution for these two," he said.

"And whatever might happen in the next few days, the relationship with Indonesia must endure and over time it must grow stronger."

Indonesia's ambassador to Australia, Nadjib Kesoema, said the imminent execution of the duo is very sad, but Indonesia is fighting a chronic drug problem.

Mr Kesoema spoke at a business breakfast in Perth shortly after Sukumaran and Chan were moved from Bali, and said more than 1,500 Indonesians died every month because of drug abuse.

He said the imminent executions are a "very bad and very sad situation also for Indonesia".