Former All Blacks captain Wayne Shelford is unsurprised by claims that the French rugby team were 'loaded' during their famous 1986 win against the All Blacks. 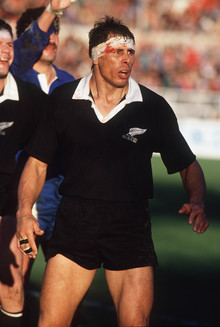 Wayne "Buck" Shelford during an All Blacks test against France in Christchurch, 1989. Photo: GETTY IMAGES

Shelford, who lost teeth and had his scrotum ripped open in the game known as the "Battle of Nantes", said he had always believed the French players must have been on drugs at the match.

"When I came out of the tunnel and I saw them, I looked into the eyes of many of the players as I walked past them, and their eyes did not say that they were going into a game against the All Blacks, their eyes just looked like they were on something, and I could not prove it."

This comes after the publication of interviews taken from a new book, which claims France's national rugby team consumed large quantities of amphetamines in the 1980s, including in a famous win over the All Blacks.

In the book, due to come out at the beginning of March, journalist Pierre Ballester quotes former French team doctor, Jacques Mombet, who said that each team member had their own little pill by their plates at the before-match meal.

"It was like that at every match. Everybody knew about it."

Mombet said the drug taking was most obvious at the Nantes match, when France famously beat New Zealand 16-3 in November 1986, which resulted in All Black legend Wayne Shelford being knocked out and losing several teeth in the process.

"It was from that match on that things changed: the All Blacks realised that their opponents were loaded, and discreetly put the affair before the International Rugby Board, who alerted the Minister of Sport."

France's rugby establishment did not immediately react to the allegations.

Ballester wrote a 2004 book on disgraced cycling champion Lance Armstrong in which he was among the first to publicly make drug allegations against the seven-time Tour de France champion.

His rugby book, "Rugby à charges, l'enquete choc" (The shocking case against rugby) will be released in France on 5 March.