Emergency authorities are focussing their efforts on getting to rural properties in central Queensland in the aftermath of Cyclone Marcia. 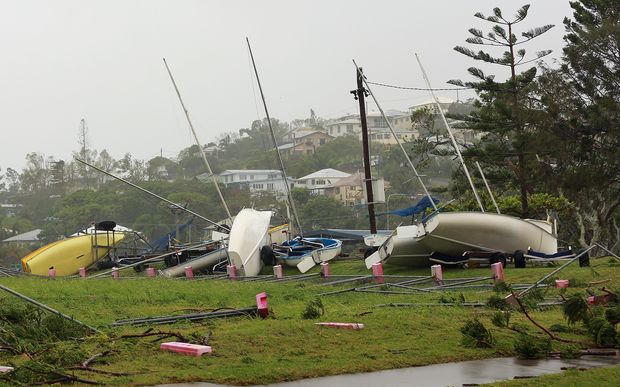 Washed away boats sit on the ground after Tropical Cyclone Marcia hit the coastal town of Yeppoon in north Queensland. Photo: AFP

The cyclone swept through the state on Friday night bringing severe winds and torrential rain, damaging hundreds of homes and causing widespread flooding.

A small contingent of soldiers and Defence Force engineers were on the ground in Rockhampton and Yeppoon helping where they could, including clearing trees felled by the storm, Townsville Brigadier Roger Noble said.

Brigadier Noble said in previous major disasters an entire brigade of 3,500 soldiers had been sent in, but sending that number to central Queensland was unlikely.

"There is a whole pile of stuff to be done," Brigadier Noble said.

"It will depend on what the State Government will ask us to do and then we just build a team, send it down and just deliver."

It is estimated 1,500 homes have been damaged and about 100 families left homeless.

Premier Annastacia Palaszczuk said state and federal emergency assistance grants would be made available in the coming days, for those who needed it the most.

There were still 50,000 homes and businesses without power in the major centres of Rockhampton and Yeppoon on Monday with some smaller towns and regional centres entering their fourth day without power.

Electricity was restored to around 15,000 properties over the weekend, mostly in the Gladstone, Biloela, Monto and Wide Bay areas.

Power was also restored to most hospitals and health facilities in Rockhampton over the weekend.

"People have been working around the clock to get as many schools open today as possible," Ms Jones said.

The aftermath of Cyclone Lam

Meanwhile, emergency workers are continuing to clean up after Cyclone Lam in remote communities of the Northern Territory, where schools are due to reopen and power and water services are getting back to normal.

Four remote indigenous communities were affected by the category four storm, which hit Elcho Island off the NT's north coast on Thursday night before turning inland.

The community of Galiwinku sustained the most damage, with about two-thirds of the community's houses affected, six of which were destroyed.

Chief Minister Adam Giles said it was too soon to estimate the damage cost or how long it will take to rebuild, after a visit to Elcho Island on Sunday.

Emergency services teams were restoring essential services and surveying the damage in the remote communities.

A state of emergency will remain in place across the four communities until Tuesday, when it will be reassessed, said acting Police Commissioner Reece Kershaw.