Cyclone Marcia is leaving a trail of destruction along central Queensland as it slowly tracks south over land. 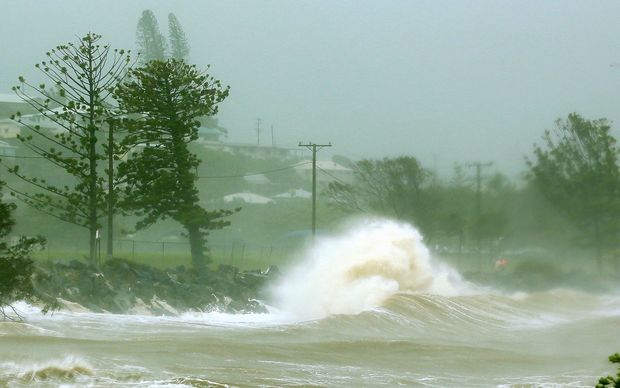 Waves crash into a breakwall after Tropical Cyclone Marcia made landfall in the coastal town of Yeppoon. Photo: AFP

A category 5 system made landfall north of Yeppoon about 8:00am and hit Rockhampton this afternoon as a category 3, lashing the town of 80,000 people with gusts up to 205 kilometres an hour.

The system was downgraded to a category 2 about 5:00pm and is about 45 kilometres away from Biloela.

There were reports of extensive damage - houses destroyed or unroofed - but authorities said it was still too early and too dangerous to assess the full damage.

So far there has been no loss of life and the army has been called on to help assess the damage on Saturday morning.

Bungundarra local Brett, whose property overlooks the Byfield National Park north of Yeppoon, watched scores of trees uproot during the thick of the storm.

The roof was ripped off his shed and his neighbour's shed suffered the same fate.

Brett's fences on his farm were also flattened and his cows now roam freely through the sodden ground.

"The forest is absolute devastation, millions and millions dollars worth damage," he said.

"The trees are gone, flattened.

John McGrath, a wildlife ranger who lives on the beach at Yeppoon, told ABC News 24 he had watched the situation worsen since early this morning and his young family had taken shelter in the bathroom of their century-old house.

"Looking out the window and basically the trees and bushes are just going side to side, really getting buffeted about - quite wild winds," he said.

George Thompson said he had evacuated from a boat he was staying on in Yeppoon.

"She's still in Ross Creek, but I'm not quite sure how much longer it will be there - massive surge on top of the big tide so I'm expecting the worst," he said.

Yeppoon resident Katherine said she was amazed by Marcia's power.

"I heard this sound, and it sounded like a jumbo jet was about to land on my house - this enormous surge of just rain and wind," she said.

Paramedic Kate Cudmore, who is at the evacuation centre at Yeppoon High School, said about 500 people were sheltering there.

"Many people didn't want to leave their homes, but because they're in lower lying areas it was strongly encouraged," she said.

"There is a lot of anxious people, a lot of people in a small area, so a lot of different family groups and mix of different people, so people probably feel very out of their comfort zones."

Meanwhile, Brisbane and Gold Coast residents were warned to get ready as creeks began to flood and strong winds headed south.

Queensland Premier Annastacia Palaszczuk said Tropical Cyclone Marcia was not yet affecting Brisbane and any localised flooding in the south-east region was due to a separate weather event.

"Now, in relation to south-east Queensland, there have been quite a few concerns raised about the amount of rain that we are receiving here in the south-east," she said.

"At the moment, this is not connected to the cyclone. This is a separate weather event. 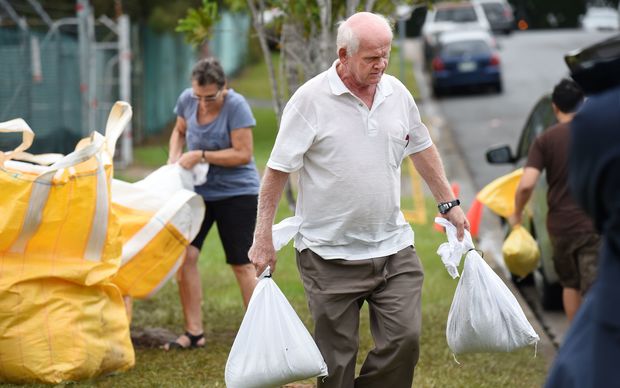 Brisbane residents prepare sandbags against the heavy rain forecast to arrive with the cyclone. Photo: AAP

A separate storm, Cylone Lam, hit the remote Northern Territory early today. The category 4 storm was carrying wind gusts of up to 250 km/h as it struck three isolated communities. It has now been downgraded to a category 1.

Cyclone Lam has affected three isolated communities and is forecast to track towards the remote Top End town of Bulman.

The category 4 storm crossed the coast between Milingimbi and Elcho Island early this morning, but it has since been downgraded to a category 1.

The Bureau of Meteorology said areas affected are Goulburn Island to Port Roper, including Nhulunbuy, Groote Eylandt and adjacent inland areas to Bulman.

Police said the cyclone has reached the remote communities of Galiwinku, Milingimbi and Ramingining, about 560km east of Darwin.

Some 1000 people are thought to be impacted in the communities, and police said the remoteness of the region meant authorities were not yet able assess damage in the area. 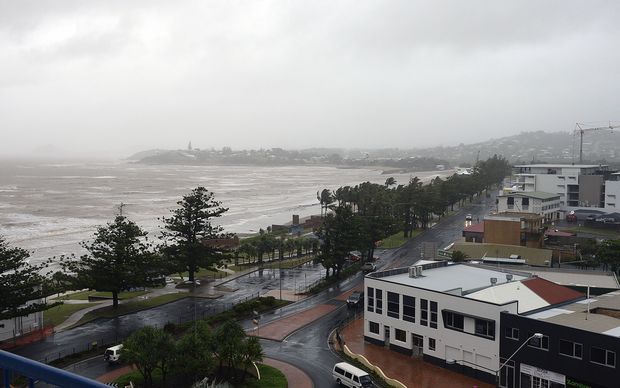