Haiti has cancelled the last day of carnival and announced three days of mourning after 16 people were killed when a float hit a power line in the capital Port-au-Prince. 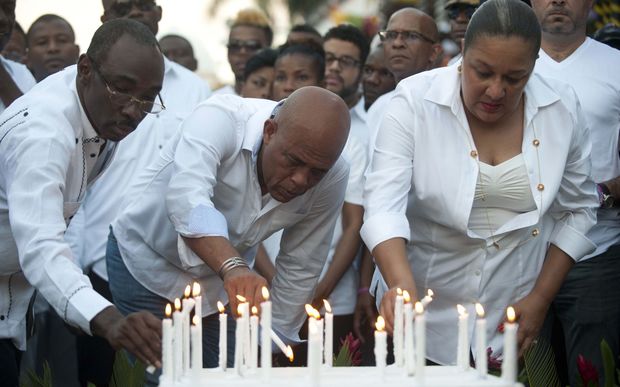 As many as 78 were injured after the high-voltage power line caught a popular singer known as Fantom atop the float as it passed near the presidential stand, which was packed with spectators.

Most of the victims were trampled to death in the ensuing panic after the singer struck the power cable, witnesses said.

Fantom, part of the hip-hop band Barikad Crew, was among the injured and was in a stable but serious condition in a hospital, according to one of his friends.

Prime Minister Evans Paul held a news conference to announce the cancellation of Carnival and three days of mourning.

President Michel Martelly expressed his "sincerest sympathies" to the victims in a Twitter message and first lady Sophia Martelly visited hospitals that were treating the injured.

They later joined cabinet ministers as well as prominent artists and carnival organisers at a silent parade to remember the dead, with marchers dressed in white carrying candles as a sign of mourning.

At Brazil's Carnival three men were fatally electrocuted on Tuesday when they pushed a float toward a parade ground and it struck a high-tension power cable in Rio de Janeiro.