Gary Glitter has been found guilty of historical sex abuse against three young girls between 1975 and 1980. 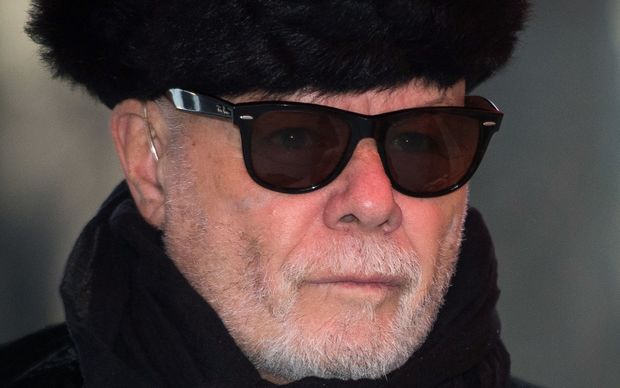 Gary Glitter before arriving in court this week. Photo: AFP

The 70-year-old former singer - real name Paul Gadd - was convicted of attempted rape, four counts of indecent assault and one of having sex with a girl under the age of 13.

Gadd, who denied all charges, was acquitted of three other counts at Southwark Crown Court, London.

He was remanded in custody to be sentenced on 27 February.

He could face up to life imprisonment for the offence of having sex with an underage girl.

The court heard one victim was under the age of 10 when Gadd, of Marylebone, central London, tried to rape her in 1975.

She said the singer had crept into her bed as she slept and that afterwards she had felt "ashamed and dirty". She only managed to escape by moving away and then wrapping herself in sheets and blankets.

The victim told the trial she had been to the star's mansion a number of times as a child and that after the attack, drunken Gadd had fallen asleep in the bed while she locked herself in a bathroom.

Gadd also attacked two other girls, aged 12 and 13, after inviting them backstage to his dressing room.

He had claimed he could not have abused them there because he had been cleaning his wig.

Gadd was also cleared of two counts of indecent assault and one count of administering a drug or other thing in order to facilitate sexual intercourse.

The jury of seven women and five men had been considering their verdicts since Wednesday.

Det Ch Insp Mick Orchard of the Metropolitan Police said Gadd had "shown himself to be a sexual predator who took advantage of the star status afforded to him by targeting young girls who trusted him and were in awe of his fame".

He added that "his lack of remorse and defence that the victims were lying make his crimes all the more indefensible".

Gadd, the first person to be arrested as part of Operation Yewtree, had been jailed for four months in 1999 after admitting possessing thousands of images of child pornography.

Peter Watt, director of national services for the NSPCC, said: "Glitter was devious and manipulative throughout this trial.

"Thankfully the jury has seen through all the fake tears, and his attempts to paint his victims as liars, gold diggers or opportunistic fantasists.

"He tried to portray himself as the victim in this case, as a remorseful, penitent man who had paid for his previous crimes but now faced malicious new allegations. It was just another performance.

"His previous convictions, including those for possession of more than 4,000 indecent images of children and sexual assaults in Vietnam, were indicative of a predatory sexual interest in children spanning decades."

Mark Castle, chief executive of charity Victim Support, said: "We hope this verdict will encourage people who have been sexually abused to speak out or seek help.

"Unless they have confidence in the criminal justice system, abusers like Paul Gadd will not be brought to justice."