The Scottish government has blocked the granting of permits for fracking, denting the ambition of British prime minister David Cameron to develop shale gas deposits. 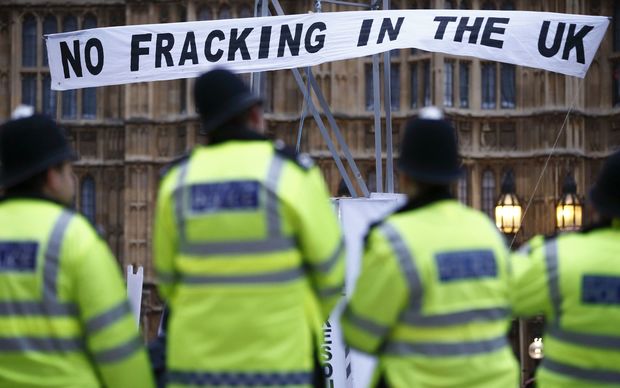 A protest against hydraulic fracturing for shale gas in London on 1 December 2012. Photo: AFP

Mr Cameron has said he will go "all out for shale" to help stem a decline in North Sea oil and gas output.

Scotland is estimated to have around 80 trillion cubic metres of shale gas resources - enough to cover all of Britain's gas needs for more than 30 years.

But yesterday its energy minister, Fergus Ewing, announced a moratorium on planning permits until the health impact and other consequences of extraction have been fully examined.

Officials said last week Cuadrilla's applications should be rejected when the council voted because the work would be too noisy and create too much traffic.

In response Cuadrilla, chaired by ex-BP boss John Browne, laid out changes it could make, which councillors have opened for public consultation for at least eight weeks.

"The additional information we have provided on further mitigation measures will, we believe, fully address the noise and traffic concerns raised," Cuadrilla said in a statement.

"We remain committed to the exploration of shale gas in Lancashire."

Fracking, in which chemicals and water are blasted at underground rock formations to release trapped gas, has come under fire from environmentalists who are concerned about groundwater contamination and earth tremors.

"The councillors should look again at the mounting evidence of fracking's environmental, health and climate impacts, and put the wellbeing of their communities before the interests of the shale lobby," Greenpeace UK energy and climate campaigner Simon Clydesdale said.

Anti-fracking campaigners protested outside the council building on Wednesday, holding posters displaying slogans such as "Lancashire's not for shale".

Opposition to fracking has been mounting in Britain and, earlier this week, the government in London fended off proposals from lawmakers to ban shale gas fracking outright, agreeing instead to curb fracking in national parks.

There has also been popular opposition in mainland Europe, notably in densely-populated Germany, whose government has said it plans to allow fracking only below a depth of 3000 metres with current technology.

The wavering sentiment has knocked confidence in the sector, with shares in shale gas explorer IGas Energy sliding in the run-up to Wednesday's decisions.

They rose sharply through the day however as the local English council did not reject Cuadrilla's application outright.

Swiss chemicals group Ineos, part-owner of Scotland's Grangemouth refinery, owns and has applied for shale gas licences in Scotland as part of a $1 billion investment plan.

In the US, booming shale gas production has put the country on the path to energy independence and lowered energy costs for industry and businesses.

Investors in shale gas projects take a long-term view on commodity prices so the recent slump in oil prices is considered unlikely to have lasting impact on UK shale projects.