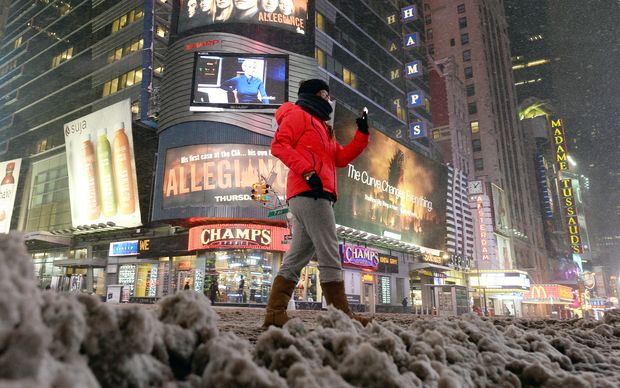 Authorities ordered drivers off the streets in New York and other cities such as Boston in the face of Winter Storm Juno, which forecasters warned could reach historic proportions, dumping up to 1m of snow in some areas.

New York Mayor Bill de Blasio said it would be "most likely to be one of the largest blizzards in the history of New York City".

More than 7100 flights were cancelled on Monday and Tuesday, as Manhattan was abandoned by panicked commuters rushing home early, leaving behind eerily quiet snowy streets.

The storm forced the rare cancellation of Broadway shows, the New York city transit system was shut at 11pm and road travel made a criminal offence in 13 counties of New York state.

Residents across the region rushed to supermarkets to stockpile food and essential items, as commuters rushed home to hunker down.

"It could be a matter of life and death, and that's not being overly dramatic, so caution is required," New York state Governor Andrew Cuomo warned.

States of emergency were declared in New York and New Jersey and a travel ban imposed in Connecticut.

Heavy snow buffeted the region but Juno was expected to escalate into a major storm with poor visibility and dangerous winds overnight that will paralyze swaths of the East Coast.

As well as blizzard warnings, flood warnings are also in effect, with officials warning against power outages and falling trees. 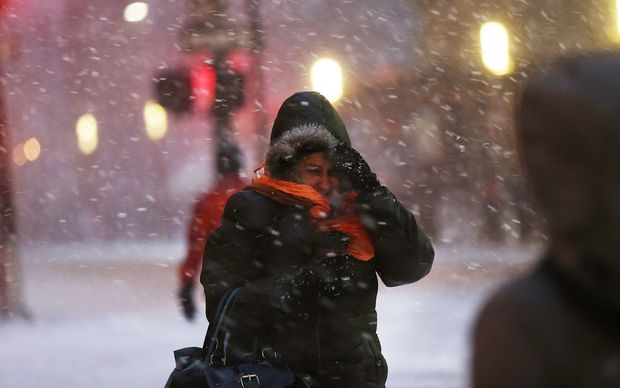 Pedestrians walk along a Manhattan street in heavy snow as New York braces for a major winter storm. Photo: AFP