Large parts of the United States east coast are bracing for a "possibly historic" blizzard which is expected to dump as much as 1m snow and disrupt transport for millions of people.

Brooklyn's Prospect Park following an evening storm on Saturday. Forecasters are warning a massive blizzard is on the way. Photo: AFP

With parts of the region already hit by a strong winter system over the weekend, New Yorkers braced for what Mayor Bill de Blasio said could be a storm "the likes of which we've never seen before".

"We are facing most likely one of the largest snow storms in the history of this city," de Blasio told a news conference, telling residents to stay home if possible as up to three feet of snow blankets the city.

"My message to all New Yorkers is to prepare for something worse than we have seen before."

The US Weather Channel referred to the cold blast as a "possibly historic" winter storm which would likely result in flight cancellations, delays and possible airport closures late Monday to Tuesday.

"Take every precaution, now is the time to get ready for this extreme weather," de Blasio said. "Don't underestimate the storm."

The National Weather Service said the stage was set for a major "nor'easter" storm which would affect parts of the region from Monday to Wednesday.

"This system will be responsible for heavy snowfall and strong winds, with blizzard conditions possible along coastal areas from New Jersey to Massachusetts," the weather service said. 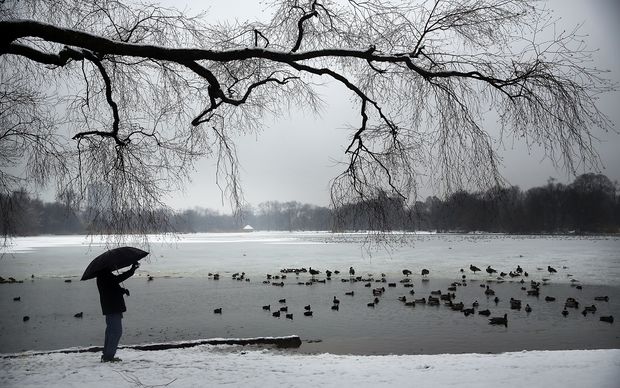 Blizzard warnings were in effect along the coast from central New Jersey to the Canadian border.

People were scrambling to pick up storm staples such as shovels, road salt and ice scrapers.

In downtown Manhattan, an employee at a Home Depot hardware store crammed with pre-storm shoppers shot and killed his boss before turning the gun on himself, police said. The motive was not immediately clear.

"With a major winter storm approaching the state, I urge New Yorkers to take all necessary precautions and make preparations for the possibility that commutes will be disrupted on Monday and Tuesday," Governor Andrew Cuomo said.

New York city-area Port Authority employees have been ordered to work 12-hour shift starting on Monday to prepare for the onslaught, he added.

In New Jersey up to eastern Massachusetts, 15-30cm of snow was expected, the weather service said. Further south, in parts of Maryland and Pennsylvania, 10-20cm was predicted.

Boston Mayor Marty Walsh called on people in the city to try to be helpful to each other.

"We ask that each and every single Boston resident look after their neighbour, be it someone you see outdoors or someone living next door," he said.