Salvage teams have begun an operation to raise the fuselage of AirAsia flight QZ8501, which crashed into the Java Sea last month killing all 162 on board. 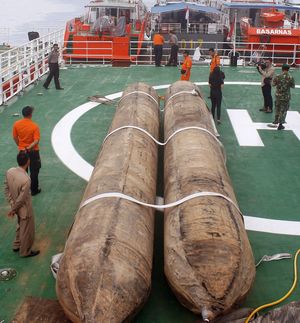 Giant lifting balloon bags are placed on the deck of the Indonesia's National Search And Rescue Agency n preparation for the recover of the fuselage of ill-fated AirAsia flight QZ8501. Photo: AFP

However, the initial attempt was unsuccessful as ropes around the fuselage snapped.

Another four bodies had been recovered, bringing the total to 69, with more thought to be inside.

Indonesian officials said the Airbus A320-200 may have climbed too fast to try to avoid a storm and stalled.

The jet was flying from Surabaya in Indonesia to Singapore.

A preliminary report on the crash is expected to be filed next week , although the full investigation will take months.

Divers entered the main section of the fuselage for the first time on Friday.

Poor weather and difficult sea conditions have hampered the salvage operation since the main section of the aircraft was found.

Yesterday, the salvage team tied a lifting bag to the wreckage which was capable of raising up to 10 tons.

However, seven metres from the surface, strong currents and the sharp edges of the emergency door of the aircraft cut the rope connecting the bag to the fuselage.

Navy Rear Admiral Widodo, who was overseeing the operation from a nearby ship, told the BBC divers had to pad the sharp edges with rubber material and try again.

However, strong underwater currents had delayed the second attempt.

It was believed the plane's cockpit may also be in the same area.

Indonesian rescue agency official SB Supriyadi described the difficulties of the salvage: "The divers said it was dark inside, the seats where floating about and the wires were like a tangled yarn." 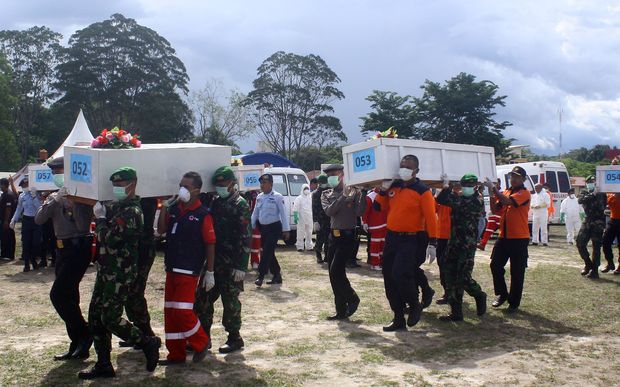 The head of Indonesia's transportation safety committee, Tatang Kurniadi, said a preliminary report on the crash is expected to be filed to the International Civil Aviation Organisation next week.

This week Transport Minister Ignasius Jonan told MPs that radar data had shown that the jet had climbed too fast - at a speed of 1,828m a minute.

He said: "It is not normal to climb like that. It's very rare for commercial planes, which normally climb just 1,000 to 2,000 feet per minute. It can only be done by a fighter jet."

This caused the plane to stall, he said.

When planes stall, their engines do not cut out but the wings no longer generate lift because there is not enough air passing over them, BBC transport correspondent Richard Westcott said.

The jet took off from Surabaya on 27 December.

Shortly before it vanished, nearly halfway into the two-hour flight, its pilot contacted air traffic control to request permission to climb to 38,000 feet from 32,000 feet to avoid big storm clouds - a common occurrence in the area.

But heavy air traffic in the area meant he was not given permission to do so straight away.

When air traffic control tried to contact the plane again, there was no answer.

The plane disappeared from radar screens shortly afterwards. It did not issue a distress signal.