Divers have salvaged the cockpit voice recorder from the wreck of the crashed AirAsia passenger jet. 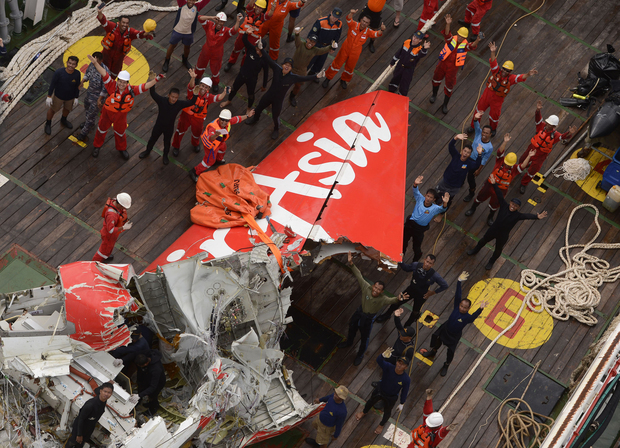 The tail of the AirAsia QZ8501 on the deck of the Indonesian Search and Rescue ship Crest Onyx after it was recovered. Photo: AFP

The recorder should contain conversations between the pilots and with air traffic controllers, and provide key clues to the cause of the crash that killed 162 people on 28 December.

Indonesian navy divers have already recovered the flight data recorder, and now hope to find the fuselage of the Airbus.

The cockpit voice recorder was now on board an Indonesian navy vessel and expected to be sent to the capital, Jakarta, for analysis, MetroTV said.

But the operations coordinator for the National Search and Rescue Agency could not confirm the report.

The Airbus A320-200 airliner lost contact with air traffic control in bad weather on 28 December, less than halfway into a two-hour flight from Indonesia's second-biggest city of Surabaya to Singapore. There were no survivors.

The black boxes contain a wealth of data that will be crucial for investigators piecing together the sequence of events that led to the airliner plunging into the sea.

Investigators may need up to a month to get a complete reading of the data.

Dozens of Indonesian navy divers took advantage of calmer weather this week to retrieve the black boxes and now hope to find the fuselage of the Airbus.

Forty-eight bodies have been retrieved from the Java Sea and brought to Surabaya for identification.