The lawyer for two Bali Nine drug traffickers sentenced to death in Indonesia says a new legal bid to overturn the decision is not a last-ditch effort to give them a few weeks more to live. 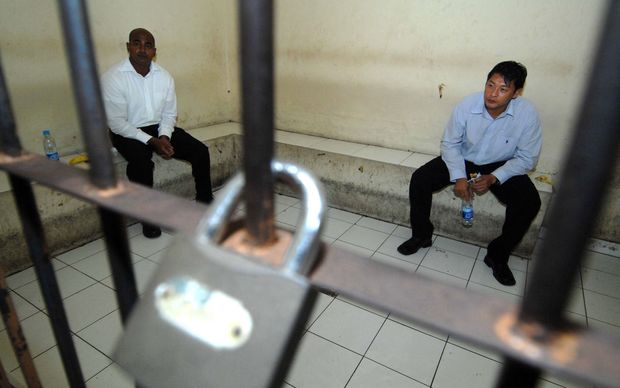 Andrew Chan and Myuran Sukumaran in a jail cell in Bali. Photo: AFP

Andrew Chan and Myuran Sukumaran faced execution by firing squad after both had their pleas for clemency rejected by Indonesia's president Joko Widodo.

Their legal representative, Julian McMahon, was now co-ordinating a team of Indonesian lawyers to launch a judicial review of the entire legal process.

He said it was a serious application.

"Putting aside the sense of drama and urgency that's sort of around this matter... they're very serious meritorious legal options," he said.

"This is not some kind of scramble to gain a few weeks of life... these are serious applications which if they're able to be argued in the courts would have a real chance of obtaining a result of a jail sentence rather than an execution."

Mr McMahon said he had been spent all his time with his clients in prison since the news about their appeals.

On Friday the Indonesian attorney-general's office said it had received notice that Andrew Chan was to be executed, but no date or location had been decided.

Attorney-general Muhammad Prasetyo previously said Chan and Sukumaran would be executed together because they were convicted for the same crime.

It was expected the two Australians would get about three days' notice of their executions.

Mr McMahon said it made no sense for Indonesia to kill his clients.

"It is nonsensical to take such young men out and shoot them," he said.

Yesterday, Australian prime minister Tony Abbott made a public appeal on behalf of the convicted men.

In a statement, Mr Abbott said Chan and Sukumaran "deserve mercy", and described them as "reformed characters" who had helped to rehabilitate other prisoners.

The prime minister's statement did not detail whether or not he had spoken to Mr Widodo personally about the matter.

However Mr Abbott said he and Foreign Minister Julie Bishop were maintaining "every possible effort" to prevent Sukumaran and Chan being executed.

The prime minister said he spoke to the families of both men on Friday and would continue to offer them the Government's support.

Opposition Leader Bill Shorten said he had been briefed on the situation and was satisfied the Government was doing "everything it can".

Mr McMahon said the best political approaches were made behind closed doors - and the last thing he wanted was the case to become an Australia versus Indonesia issue.

Technically the men have exhausted their legal avenues for appeal and have already had one judicial review at the Supreme Court level.

However, they were pressing for a review of the entire legal process as well as the president's clemency decision.

The six people put to death in Indonesia last weekend were denied clemency just a month earlier, and given three days' notice of their execution.