The Indonesian attorney-general's office has received notice that Australian drug trafficker Andrew Chan is to be executed. 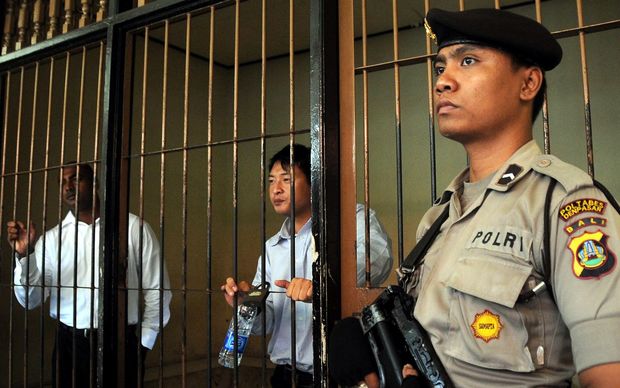 An Indonesian policeman stands guard next to a detention room where Australians Myuran Sukumaran (L) and Andrew Chan (C), members of the so called Bali Nine gang, were waiting for their trial. Photo: AFP

However, a time and place for the execution has not yet been decided after the pair were denied presidential pardons.

The letter declaring that Andrew Chan's bid for a presidential pardon had been denied, arrived in Bali yesterday.

The attorney-general Muhammad Prasetyo previously said that Chan and his fellow Australian death row inmate, Myuran Sukumaran would be executed together because they were convicted for the same crime.

The pair were given the death penalty for their role organising the so-called Bali Nine heroin trafficking attempt.

Mr Prasetyo's office confirmed that it received a copy of the letter yesterday, but was yet to decide where or when the pair would be executed.

It is expected the two Australians would get approximately three days' notice leading up to their executions.

Meanwhile, the men will attempt to appeal for a judicial review.

Technically the men have exhausted their legal avenues for appeal and have already had one judicial review at the Supreme Court level.

However, they were pressing for a review of the entire legal process as-well-as the president's clemency decision itself.

The six people put to death in Indonesia last weekend were denied clemency just a month earlier, and given three days' notice of their execution.