Australia's domestic security agency has raised the national terrorism threat level for all police to high.

The threat level for police moves from medium to high for officers in New South Wales, Western Australia, Queensland and South Australia in recognition of the danger they face as first responders, the ABC reported.

Australia's national alert level was raised to high in September last year, classifying a terrorist attack as likely but not imminent.

It also follows the recent terror-related events such as the siege in Sydney's Martin Place, shootings at the Canadian Parliament in October and a number of shootings in France that began with an attack on the offices of satirical magazine Charlie Hebdo.

As a staunch ally of the United States and its action against the Islamic State militant group in Syria and Iraq, Australia is on high alert for attacks by sympathizers of the radical group and from home-grown militants returning from fighting in the Middle East.

The Australian Federal Police issued a statement this morning citing recent terrorism events around the world as reasons for elevating the alert level. 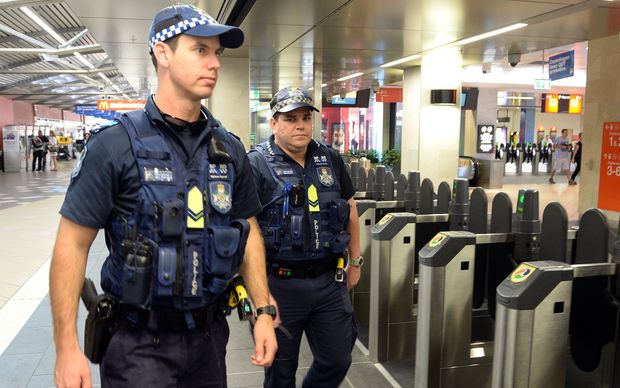 Australia has raised the threat level of a terrorist attack against police officers to "high". Photo: AAP

"The factors that lead to the elevated terrorism threat level for Australia to high in September 2014 persist and the security environment remains increasingly complex and challenging," the statement said.

"Recent events in France, Canada and Australia serve as a sobering reminder of the risks associated with policing."

Police said while relatively small, an increasing number of Australians linked to overseas terrorist groups had the intent and capability to conduct an attack against Australian police.

Queensland Police Commissioner Ian Stewart said there was no one event that led to the raised alert.

"The new threat level specifically has taken into account instances of attacks on police internationally on a number of occasions in the past few months," Commissioner Stewart said.

"There has been no one specific incident that has occurred in Australia which has triggered the reassessment to the higher level."

He said police in Queensland had been advised to be aware of their environment and their own personal safety as well as that of their loved ones.

Commissioner Stewart said concerns raised last year about a lack of body armour for police had been addressed.

"I was very clear that we do have adequate ballistic vests available for all of our police when they're doing their normal duties and we have in place the concept that if an officer feels that they need to wear personal, covert body armour, then they can apply for that and it will be granted," he said.

Western Australian police officers and staff were advised about the reassessment of the alert level this morning. They were reminded of the need to remain vigilant and apply good security practices.

South Australia's assistant police commissioner Bryan Fahy said today's change was a formal alignment of the threat level for police and the general terrorism threat level, and noted that all jurisdictions reviewed their security and risk management strategies in September.

New South Wales police issued a statement on the change this morning.