Pope Francis celebrated mass with millions of singing and cheering Catholics in the Philippine capital on Sunday, in one of the world's biggest outpourings of papal devotion. 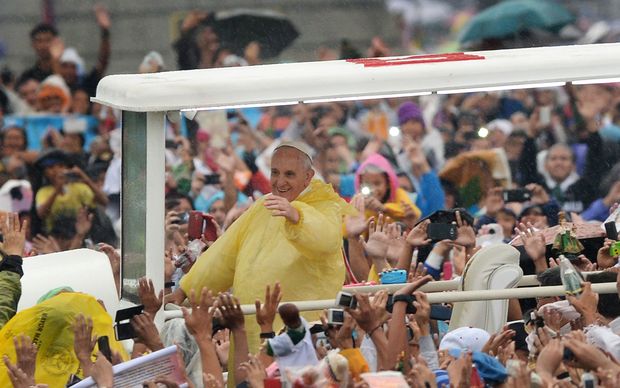 Organisers said they were preparing for a crowd of up to six million. Photo: AFP

Rain fell steadily in Manila in the hours before the mass but Filipinos are famous for practising a passionate brand of Catholicism and they turned out in a joyous mood that defied the gloomy skies.

The 78-year-old pontiff thrilled crowds on his way to the bayside park venue for mass. He travelled along a motorcade route in a "popemobile" styled after the Philippines' iconic minibuses known as jeepneys.

The pontiff, dressed in a plastic yellow disposable poncho, waved and smiled to cheering crowds that were 20-deep. The popemobile stopped repeatedly so he could lean over barriers and kiss babies.

He than arrived to a sea of devoted followers for a mass expected to last two hours.

The Philippines is the Catholic Church's bastion in Asia, with 80 percent of the former Spanish colony followers of the faith, and he is a revered figure.

"We are devotees of the pope," Bernie Nacario, 53, told AFP as he stood amid a mass of people with his wife and two young children near Rizal Park ahead of the mass.

"The pope is an instrument of the Lord and if you are able to communicate with him, it is just like talking to God himself."

Organisers said they were preparing for a record-breaking crowd of up to six million.

While there were no immediate official estimates of the crowd size, aerial footage showed masses of people surrounding the park and nearby areas.

If the turnout is as big as expected, it would surpass the previous record for a papal gathering of five million during a mass by John Paul II at the same venue in 1995.

Before the mass the pope had an emotional encounter with former street children.

Glyzelle Palomar, a 12-year-old taken in by a church charity, wept as she asked how God could allow children to descend into prostitution and drug addiction.

The pope enfolded her in his arms, and discarded his prepared speech as he reverted to his native Spanish to deliver an impromptu and heartfelt response.

"She is the only one who has put a question for which there is no answer and she wasn't even able to express it in words but in tears," he told those gathered at a Catholic university in Manila. 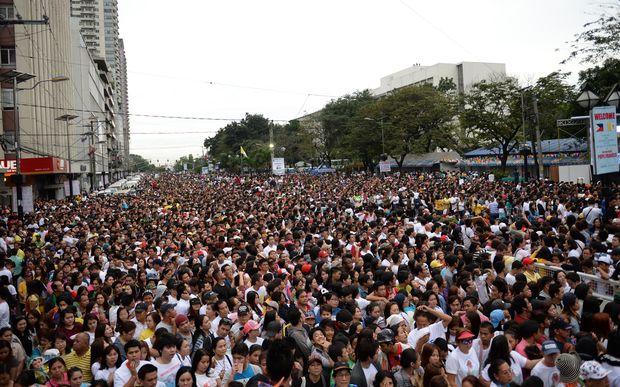 Thousands of people gather to wait for a mass to be celebrated by Pope Francis in Manila. Photo: AFP

The pope's five-day visit to the Philippines, which began on Thursday, followed two days in Sri Lanka.

It is his second trip to Asia in five months, in a nod to the region's growing importance to the Catholic Church as it faces declining support in Europe and the United States.

It is also the fourth papal visit to the Philippines, where rapturous receptions have cemented the nation's status as the Church's Asian role model.

Ahead of the mass, May Dupaya, 41, stood on Sunday afternoon with a black plastic bag to shield her from the rain, after lending her raincoat to her mother.

Philippine authorities have undertaken one of their biggest-ever security operations to protect the pope, with nearly 40,000 soldiers and police deployed for Sunday's event.

"This is a sea of faith we are dealing with," acting national chief Leonardo Espina told reporters.

And not everything has gone according to plan.

The pope said the main reason for visiting the Philippines was to meet survivors of Super Typhoon Haiyan, the strongest storm ever recorded on land which claimed more than 7,350 lives in November 2013.

He flew on Saturday morning from Manila to Leyte island, ground zero for the typhoon, for a planned full day in communities where homes were flattened by monster winds and tsunami-like storm surges.

But, with Tropical Storm Mekkhala descending on the region, he was forced to cut short his visit and fly back to Manila.

"I apologise to you all. I'm sad about this, truly saddened," the pontiff told thousands who had gathered at one church shortly before he raced back to airport.

Just 30 minutes after his flight left, a plane carrying top aides of President Benigno Aquino skidded off the same runway as it was buffeted by strong side winds while trying to take off. No one was seriously injured.

Earlier in the day, the storm's winds tore down scaffolding at the venue where the pope said mass, killing a woman volunteer with the organising committee.

Still, the crowd of 200,000 typhoon survivors who turned out in heavy rain were overjoyed the pontiff had braved the dangerous weather to see them.

"Long live the pope!" the crowd chanted as he arrived in Tacloban, the capital of Leyte and one of the worst-hit cities.