The CCTV images purport to show Hayat Boumeddiene passing through passport control with another man on 2 January. She is thought to now be in Syria. 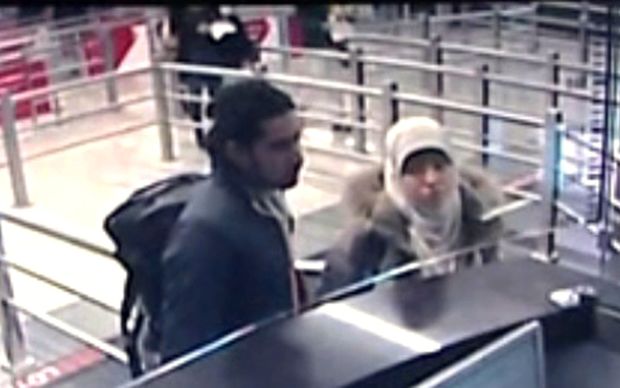 French police are seeking the 26-year-old after Coulibaly and two other gunmen launched deadly attacks on Paris last week.

Seventeen people were shot dead in Paris last week in attacks at satirical magazine Charlie Hebdo, on a police officer, and at a kosher supermarket. The three gunmen involved were killed.

France is mobilising 10,000 troops to boost security after the deadly attacks, and will send thousands of police to protect Jewish schools.

Defence Minister Jean-Yves Le Drian says troops will be in place from Tuesday evening in sensitive areas. It is the first time troops have been deployed within France on such a scale.

French police identified Hayat Boumeddiene as a suspect although she left France before the attacks.

The Turkish foreign minister said she arrived in Turkey on 2 January from Madrid, before continuing to Syria six days later.

The security footage, published by Haberturk newspaper, was released by Turkish police. It appeared to show Hayat Boumeddiene and a man at Sabiha Gokcen Airport in Istanbul.

Turkish officials told the BBC the man was Mehdi Sabri Belhouchine, a man of North African origin, and that he was not on a watch list. Officials believe he crossed into Syria with Hayat Boumeddiene.