Japan's move to send whaling boats back to the Antarctic tomorrow for non-lethal scientific research is being labelled a farce by an environmental group.

A minke whale on the deck of a Japanese whaling ship for research whaling at Antarctic Ocean. Photo: AFP / Institute of Cetacean Research

The Institute of Cetecean Research (ICR) said it would use non-lethal methods such as sightings and biopsy sampling.

So tomorrow, to get around the ruling, the institute was sending four boats for non-lethal research.

The boats would be there until the end of March.

Speaking from the Bob Barker in the South Indian Ocean, Sea Shepherd Captain Peter Hammarstedt, said the scientific programme was a farce.

He said this year's non-lethal research was merely a way to scope the whales out before killing them next season.

"We're incredibly sceptical of Japan's current idea to go down and conduct non-lethal research, given that they've already declared that they plan to resume their commercial whaling already in 2015-16."

"The data they collect now will be used for future lethal programmes," he said.

Last November, Japan announced its intention to kill 333 Minke whales in the 2015-16 season.

A spokesperson for the ICR in Tokyo, Glenn Inwood, said Japan was entirely open and honest about its research intentions. 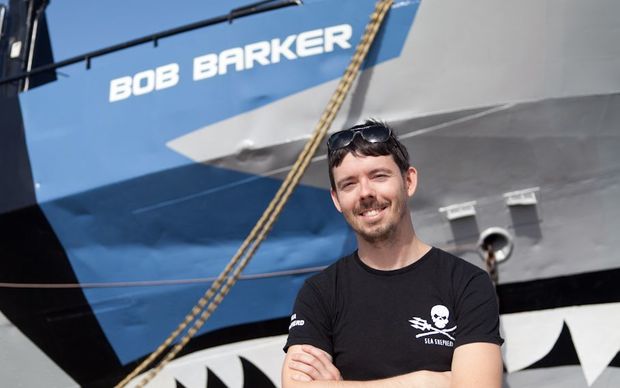 He said the Institute wanted to develop its knowledge base required to undertake sustainable whaling in the Antarctic.

"The research has been undertaken by the Tokyo-based ICR, under request from the government of Japan, which considers the collection of scientific data to be an important factor for the management of sustainable whaling in that part of the world."

In March's decision from the ICJ decision the court said the special permits granted by Japan "for the killing, taking, and treating of whales ... are not for purposes of scientific research".

It said the sample size of its lethal research was not driven by strictly scientific considerations.

It also said that despite Japan killing about 3,600 minke whales, in the past decade, its scientific output to date appeared to be limited.

Mr Inwood said future research would be in accordance with the ICJ's decision.

"Future research expeditions in the Antarctic are likely to include some lethal research sampling, where limited numbers of whales from abundant species are taken, and the government of Japan is confident that it is consistent with last year's decision by the ICJ."

The court also asked that Japan review whether it could gain more information from its non-lethal research efforts.

However, Mr Hammarstedt said Japan's efforts this season were intended to undermine the value of non-lethal research, strengthening the case for lethal research in the foreseeable future.