A merchant ship with no crew and 450 migrants on board is reported to be heading towards the south-eastern Italian coast. 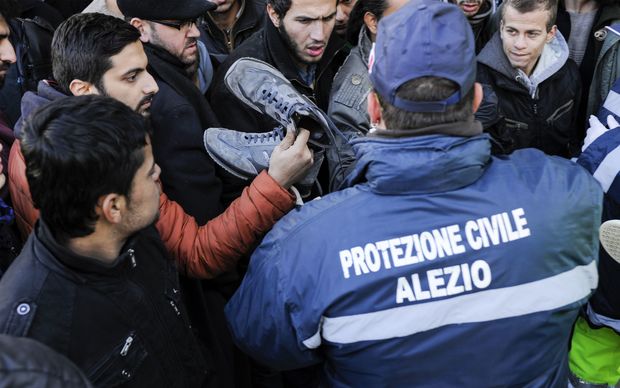 Migrants gather at a first aid centre after arriving in Italy aboard a different migrant ship, the Moldovan-flagged 'Blue Sky M', earlier this week. Photo: AFP

The ship has been identified as the 60-metre-long Sierra Leone-registered Ezadeen.

Italy's air force said a helicopter had been sent to lower men on to the vessel, which had lost power, and that they would try to bring the ship under control.

They said the ship was now floating 65 kilometres off Capo di Leuca, the tip of Italy's heel, in choppy seas.

"Because of the difficult weather conditions the ship can only be boarded from the air," the air force said in a statement.

Prior to losing power, the ship had been moving at a brisk seven knots and had been spotted by a coastguard plane about 130 kilometres offshore shortly after nightfall.

One of the people on board the Ezadeen was able to operate the ship's radio and informed the coastguard that the crew had jumped ship.

The coastguard asked for assistance from Icelandic patrol boat Tyr, which was in the area on a mission with Frontex, the European Union's border agency.

The Tyr was able to draw alongside the runaway ship, but the weather conditions made boarding impossible.

The Icelandic vessel has three doctors on board who will be winched on to the merchant ship by helicopter to treat any unwell passengers, the air force said.

It had been abandoned by people-smugglers who had navigated it from Turkey via Greek waters.

More than 170,000 migrants and refugees have been rescued by Italy in the past 14 months and hundreds, possibly thousands, have perished trying to make similar crossings.

They are almost invariably under the control of traffickers who appear to have decided that the best way to get their human cargoes to Europe is to put to sea and then abandon the boats.