Objects including items resembling an emergency slide and a plane door have been spotted in the Java Sea where the search for a missing AirAsia flight is underway. 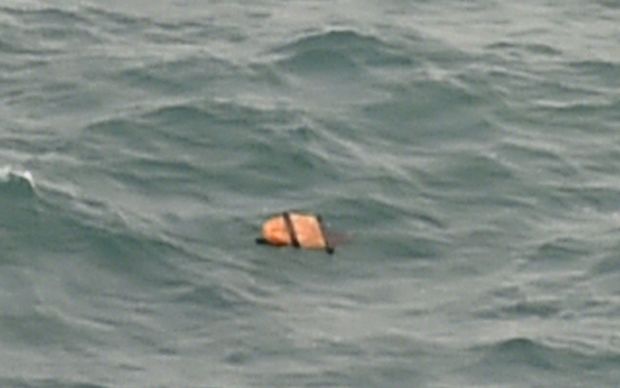 Floating debris spotted in the same area as other items being investigated by Indonesian authorities as possible objects from missing AirAsia flight. Photo: AFP

The Indonesian search and rescue agency said that it was 95 percent sure that the debris spotted off the western coast of Borneo was from the missing AirAsia plane.

Indonesian media is also saying other objects resembling a body, luggage and a life vest have been spotted by a pilot involved in the search operation.

Reuters reports helicopters are being sent to the area to try and recover the objects. 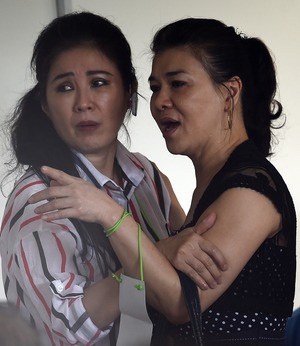 Relatives of passengers on board the AirAsia flight react to the news that debris has been found. Photo: AFP

"We spotted about 10 big objects and many more small white-coloured objects which we could not photograph," Indonesian air force official Agus Dwi Putranto told a news conference.

"The position is 10 kilometres from the location the plane was last captured by radar," he said.

He displayed 10 photos of objects resembling a plane door, emergency slide, and a square box-like object.

An AFP photographer on the same flight that spotted the debris said he had seen objects in the sea resembling a life raft, life jackets and long orange tubes.

The search for the Airbus A320-200 carrying 162 people which lost contact on route from Indonesia's second largest city Surabaya to Singapore has been focussed in the Java Sea.

A New Zealand Air Force P3 Orion has been deployed to join the international search for the missing AirAsia flight.

The Orion left New Zealand this morning and was due in Darwin later today.

The Ministry of Foreign Affairs said the aircraft would operate under the instruction of Indonesian authorities. 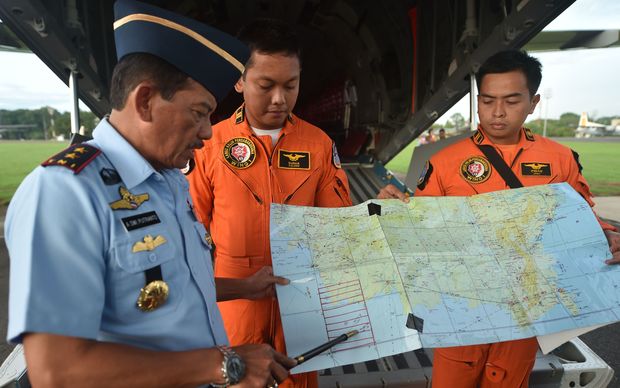 A US warship also joined an expanded search for flight QZ8501 as the pilot's last words to air traffic control were revealed.

The recording shows the pilot wanted to avoid a menacing storm system before all communication was lost, an Indonesian air safety official said.

Before take-off the pilot had asked for permission to fly at a higher level to avoid a storm but his request was not approved due to heavy traffic on the popular route, AirNav, Indonesia's flight navigation service, said.

In his final communication, the pilot asked to alter his course and repeated his original request to ascend to avoid bad weather.

"The pilot requested to air traffic controllers to deviate to the left side due to bad weather, which was immediately approved," Wisnu Darjono, the safety director for Indonesia's flight navigation service AirNav told AFP. 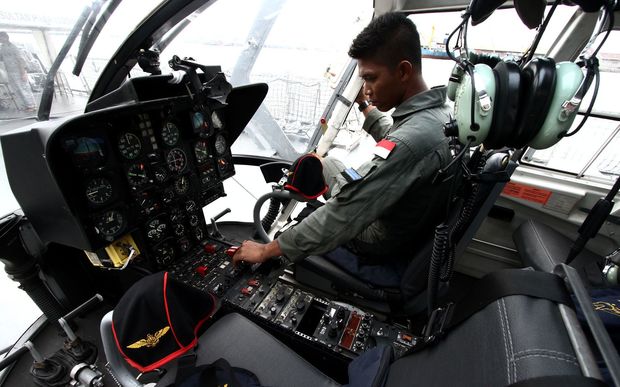 "After a few seconds the pilot requested to ascend from 32,000 to 38,000 feet but could not be immediately approved as some planes were flying above it at that time," Mr Darjono said.

That was the last communication with AirAsia Flight QZ8501.

"Two to three minutes later when the controller was going to give a clearance to a level of 34,000, the plane did not give any response," he said.

At take-off the pilot had requested permission to fly at 34,000 feet but due to traffic it could not be approved, he said.

"At that time there were 11 planes flying route M635," he said, adding that 160 flights a day used the route to Singapore.

Details of the pilot's final contact came as the National Search and Rescue Agency (Basarnas) said it had expanded the search.

The hunt is focused on waters around the islands of Bangka and Belitung in the Java Sea, across from Kalimantan on Borneo island, but the army has also been asked to carry out ground searches, including in mountainous areas.

"We intensified today's search operation by expanding the search area on sea from the coordinates where the plane was missing and on land to the east and west of Borneo island," deputy operations chief Tatang Zainuddin told AFP.