Italian officials say they cannot be certain how many people are still missing from the Norman Atlantic ferry off Corfu, with evacuation complete. 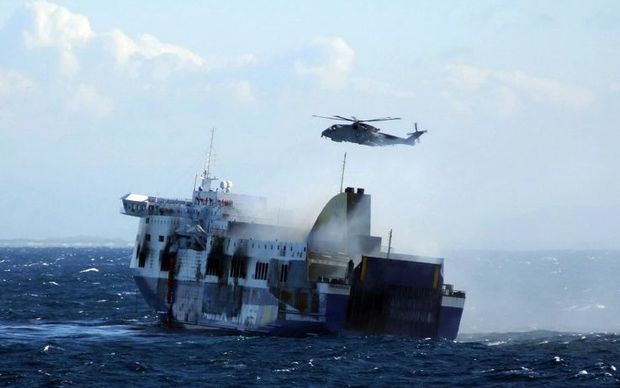 The rescue operation saved all but seven passengers from the burned ferry Norman Atlantic. Photo: AFP

One man died trying to escape the ship, which was on a night journey from Greece to Italy, and a further nine bodies were later found.

More than 400 people were rescued amid gale-force winds and thick smoke, reports the BBC.

"We cannot say how many people may be missing,'' Italian Transport Minister Maurizio Lupi said at a press conference on Monday evening.

He said the reason a definitive figure could not be given was because of errors on the passenger list, no-shows at boarding or people getting off at a stopover on the Greek island of Igoumenitsa.

"That is why we are continuing our [search] effort: we cannot know what the exact number was," he added.

Mr Lupi said it was up to the departure port to ensure the passenger manifest tallied with the list of those people who were rescued.

Italian navy Admiral Giovanni Pettorino said 80 of those rescued had not been on the passenger list at all. Correspondents say his remarks give credence to suggestions from Italy that the ferry may have been transporting a number of illegal migrants trying to reach Italy.

The 24-hour operation to evacuate the stricken Norman Atlantic was completed in the early afternoon (early morning NZ time).

Ship captain Argilio Giacomazzi, 62, upheld centuries of maritime tradition by ensuring he was the last man off, handing over to Italian navy officers at 2:50 pm local time.

Wrapped in blankets and with many of them sporting bandages, 49 of the 478 passengers and crew who were on board the ferry when it caught fire shortly after dawn on Sunday disembarked from a merchant ship at the Italian port of Bari.

They and other evacuees told how the fire triggered panic which the crew appeared ill-prepared to deal with.

One of the first passengers off in Bari told reporters he had thought he was going to die as parts of the boat became engulfed by thick smoke as the ferry was travelling from Greece from Italy.

We did not know what to do. The staff had no idea how to get people off the boat," he said.

"The lifeboats did not work, there was only one of them in the water and none of the crew were there to help people."

The evacuation was completed nearly 36 hours after a fire broke out on the car deck and left the huge vessel drifting dangerously in high seas off the coast of Albania.

With a second navy boat at the scene and able to provide a landing deck for helicopters, the pace of the evacuation accelerated significantly on Monday.

With the evacuation complete, questions began to be asked about how the fire started and why it was not contained.

Bari prosecutor Giuseppe Volpe announced a criminal investigation which will seek to establish whether negligence contributed to the disaster.

The Italian owner of the boat, Carlo Visentini, said he would cooperate fully.

He insisted that the vessel, which was leased to Greek operator ANEK ferries, had passed a technical inspection which included its firedoors on 19 December.

Other evacuees were flown to the Greek island of Corfu.

Athina Pappas, a Greek journalist who was travelling with her husband, added: "Everyone was consumed by panic and nobody was telling us what we had to do."

The Italian navy and coastguard worked through the night trying to get people off a boat that was being buffeted by powerful, bitingly cold winds and huge waves.

Despite their efforts, more than 200 people were still onboard at dawn, having spent 24 hours exposed to the elements in fear of their lives.

The ship, which was travelling from Patras in western Greece to Ancona in Italy, started drifting because the fire put its steering system out of action.

A flotilla of merchant, coastguard and military ships from Greece, Italy and Albania were involved in the rescue efforts.

Some of the rescued passengers displayed mild symptoms of hypothermia but doctors treating the evacuees indicated that they were mainly dealing with shock and trauma.