A rescue operation continues more than 250 passengers are still on board an Italian ferry that caught fire off the western coast of Greece.

More than 200 of the 478 passengers on board have been rescued on Monday morning. The Norman Atlantic was travelling from Patras in Greece to Ancona in Italy.

One person has died after jumping from the ship and another has been confirmed injured.

The fire, which Italian media said broke out on the ferry's car deck before spreading, is still only partly under control.

Greek officials said two Italian and two Greek helicopters are taking turns to winch passengers from the ship, two at a time, but strong winds and choppy seas are hampering the rescue.

Desperate passengers pleaded by mobile phone live on TV to be saved from a burning ferry adrift off Albania on Sunday as rescuers battled gale-force winds and billowing smoke to get to them.

"I cannot breath, we are all going to burn like rats -- God save us," cried one of the ship's cooks in a call to his wife, she told journalists. 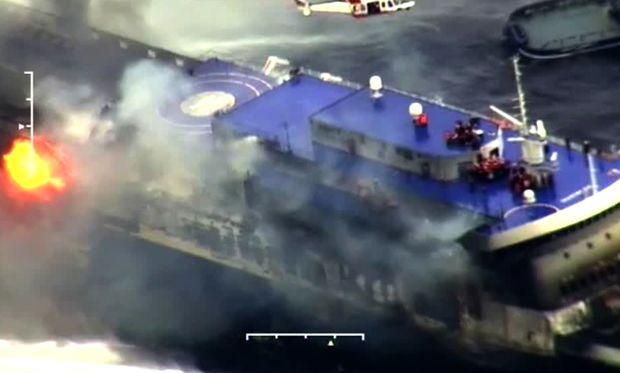 Tugs have been hosing the Norman Atlantic's charred stern and midship with sea water.

A flotilla of rescue vessels arrived from Greece, Italy and Albania to help with the rescue and helicopters are winching passengers from the bridge to the Italian ship, Europa, which is co-ordinating the rescue.

A Greek army helicopter had earlier made repeated attempts to save two passengers who fell from an escape chute and were at the mercy of six-metre waves. Their fate was unknown.

Seven merchant vessels had encircled the ferry in an attempt to shelter it from fierce Force 10 winds, officials said, as four Greek and Italian firefighting vessels began arriving from either side of the Adriatic. 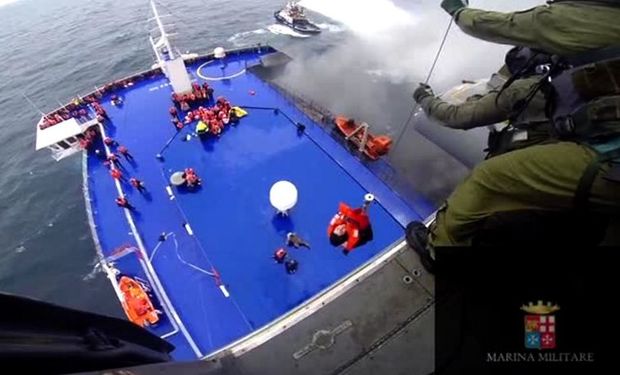 Greek Marine Minister Miltiadis Varvitsiotis said an attempt would be made to tow the vessel.

Freezing passengers huddled on the top deck and bridge of the ship told of their terror in calls to Greek television stations.

"We are on the top deck, we are soaked, we are cold and we are coughing from the smoke. There are women, children and old people," passenger Giorgos Styliaras told Mega TV.

Another told the station that "our shoes were melting" from the heat of the fire when they were mustered in the ship's reception area. 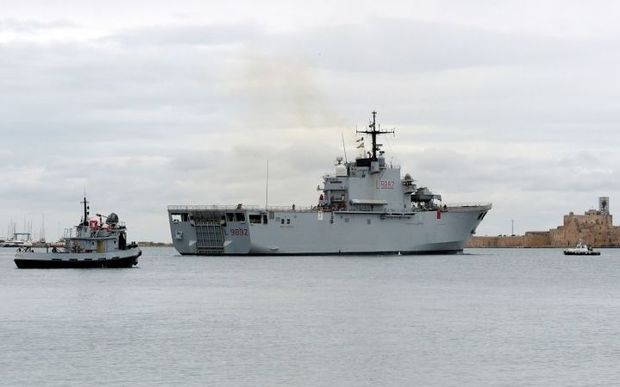 Italian Navy ship the San Giorgio leaves the port of Brindisi to take part in the rescue operations of the burning ferry Norman Atlantic. Photo: AFP

Haulage company boss Giannis Mylonas, who was in contact with three of his drivers on the vessel, said there were between 20 and 25 tanker trucks filled with olive oil on board.

"They are taking too long to find a way to help them. Let's hope this ferry will stand the heat of the fire," he told the station.

Vessels close to the ANEK Lines ferry, which caught fire 44 nautical miles northwest of the Greek island of Corfu, rushed to give assistance after picking up its distress signal at 0200 GMT, the Greek coast guard said.

The Norman Atlantic had left the Greek port of Patras at 1530 GMT on Saturday and made a stop at Igoumenitsa, before heading to the Italian port of Ancona when the fire took hold.

The car deck of the Italian-flagged ferry was believed to have been holding 195 vehicles when the fire broke out.

According to rescued passengers, the intense heat rapidly affected the rest of the ship. However, passengers stranded on the ship later seemed to be more worried by the storm, telling Greek TV the flames were subsiding.