Hundreds of people have gathered in New York for the wake of Rafael Ramos, one of two police officers who were shot and killed while sitting in their patrol car. 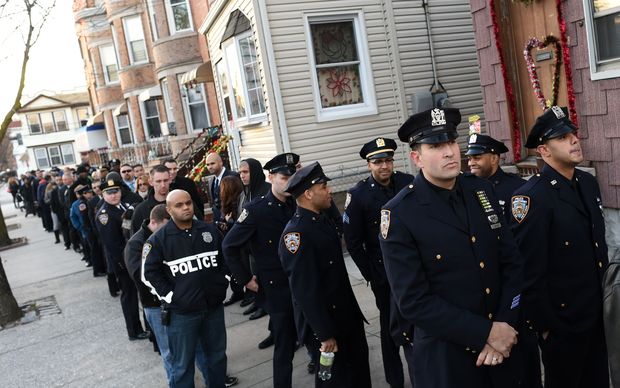 Police officers from the New York City area line up for the wake for Rafael Ramos. Photo: AFP

Mr Ramos, 40, was shot along with his partner Wenjian Liu, 32, in Brooklyn.

New York's police chief says they were "targeted for their uniform".

The gunman - who subsequently killed himself - had posted anti-police messages online, amid continuing tensions over police tactics.

Mr Ramos's funeral will take place in Queens on Saturday.

Friends and colleagues paid tribute to Mr Ramos at the wake on Friday. "He was this beam of light," said Elizabeth Vidal, who had known Mr Ramos for more than a decade.

The BBC reports that thousands of police officers from around the country are expected to join US Vice-President Joe Biden for the funeral service.

The gunman, named as 28-year-old Ismaaiyl Brinsley, had a history of mental instability, according to police.

After the shooting in the Bedford-Stuyvesant area, Brinsley ran into a subway station where he killed himself.

Before shooting them, Brinsley suggested on social media that he was planning to kill police in retaliation for the death of Eric Garner, a black man who died when white officers tried to arrest him for selling single cigarettes in New York.

A grand jury decided not to indict an officer over his death.